Four players who should never have been anywhere near an inner.

Given how well stocked England currently are for white-ball wicket-keepers – they could conceivably field all of Jos Buttler, Jonny Bairstow, Tom Banton and Sam Billings in the same XI – it’s odd to recall that for a decent stretch around the turn of the century, they were never too far away from looking pleadingly around the dressing room as would-be boundary rider after specialist fine leg averted their gaze in the hopes that they wouldn’t be asked to don the dreaded gauntlets.

What’s almost more intriguing than the part-time glovemen employed over the years are those who came close but never got the nod. There is photographic evidence of Andrew Strauss keeping in a practice game. Given Anthony McGrath once deputised in a Test match despite looking like this when keeping, how bad can Strauss have been?

In any event, with England’s glove butler production line showing no sign of slowing, the age of the wacky wicketkeeper might be over. Here’s a look back at the foursome who did the needful when asked.

More suited to the Test game, Creepy only played 13 ODIs, finishing with a strike-rate of 57. He was asked to fill in behind the sticks once, against Sri Lanka in 1999’s Carlton & United Series in Australia. Alec Stewart was horribly out of form and rested for the game, with Adam Hollioake filling in as skipper and Crawley as keeper.

The game summed plenty that was wrong with England and ODI cricket in that era. Set a meagre 182 to win in a rain-reduced 44 overs, Crawley and co. crawled to 170-9, thus losing by 11 runs. Nick Knight was perhaps the guiltiest party, bowled by Upul Chandana for an 109-ball 58. Thilan Samaraweera, who would end his 87-match Test career with an average nearing 50, was carded to bat at No.11, and won the Player of the Match award for figures of 3-34.

Crawley only managed a 21-ball 13, but at least left with his copybook unblotted in the field. He even managed a stumping, of Avishka Gunawardene off Ashley Giles.

Yep that’s right. Before he was England’s all-conquering supremo, Morgan was Jos Buttler’s wicketkeeping forefather, keeping in two games in the 2009 Champions Trophy. Matt Prior was England’s only regular keeper on the tour but was waylaid by a viral infection the evening before England’s second group game against hosts South Africa. 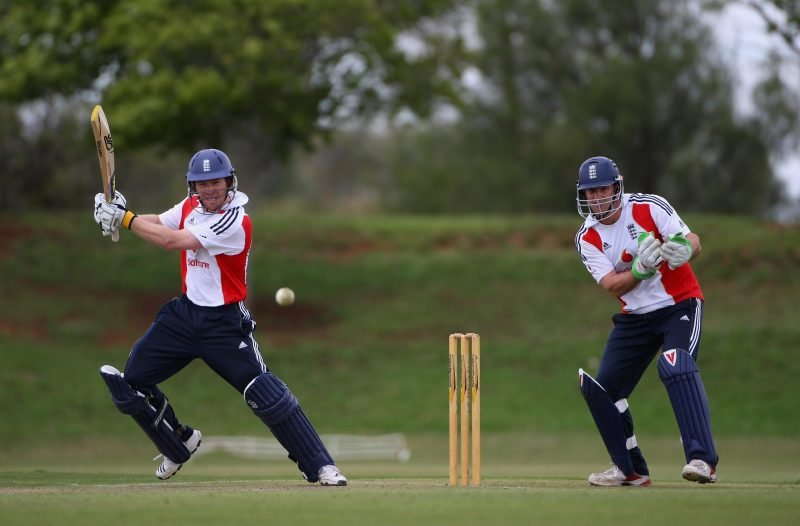 Andrew Strauss keeping in practice in 2009

Morgan, having kept a couple of times for Middlesex second XI and once for Ireland, before his change of allegiances, gamely took up the task. He first starred with bat, smashing 67 off 34 balls to boost England past 300, before putting the gloss on proceedings with a direct hit run out of Albie Morkel.

His second go wasn’t quite so fruitful. Morgan inched to nine off 40 balls – yes, 40, not 14 – as England were constricted to 146 all out in 43.1 overs. Morgan did take three catches in the chase but New Zealand cruised home, and by the time the knockouts rolled round, Steven Davies had been flown in to take over keeping duties.

The most experienced keeper on this list, and also the only one with a first-class hat-trick to his name. Might Banger be the greatest all-rounder England never realised they had?

On the evidence of his five matches as an ODI keeper, the answer is no. He managed just 64 runs in five innings, an average of 12.80. Those games included a golden duck, an eight-wicket-10-overs-left thumping by India, and a skittling for 89 by New Zealand.

Uniquely on this list, Tres earned appearances as a keeper not due to injury, but simply to balance the XI, with James Foster struggling for form.

Do you count as a part-time wicketkeeper if you kept in two-thirds of your games in an international format? The only man on this list to don the gloves in T20Is rather than ODIs, Vikram Solanki scored 24 and 43 in the two games in which he kept wicket, and just nine when not keeping. Perhaps it was being deprived of the gloves that stopped him from featuring more.

The current Surrey head coach filled in for Matt Prior on the big stage after the Big Cheese fractured a thumb at the 2007 World T20. England lost both matches he kept in, finishing last of group E without a point to their names, but he did at least get one over a ‘fellow’ stumper, catching out Brendon McCullum when England played New Zealand.