Virat Kohli’s unbeaten 82 in the group stage of the 2016 Men’s World T20 against Australia was not a lesson in power hitting, but a sublime and patient masterclass, writes Aadya Sharma.

The year 2016 turned out to be a watershed one for Kohli, who averaged 99.6 in white-ball internationals and slammed a small matter of four IPL hundreds. Yet, there wasn’t a knock more defining than the one in Mohali.

By the end of it, Kohli sunk to his knees, head bowed in relief, savouring the moment just by the side of the pitch.

Single-handedly orchestrating a terrific chase, Kohli’s T20I magnum opus came in India’s semi-final-berth-sealing win. It wasn’t a mad mix of power hitting, but one penned with a finer nib, borrowing the chase-mastering facets of MS Dhoni, his unbeaten partner at the finishing line. Kohli hit two sixes in all. Neither was a massive hoick. One barely made it over the ropes. He would have done it without any. It was all in the running, all in that gap-piercing mastery.

Chasing 161, Kohli walked in with India at 25-1, after Dhawan was bounced out by Nathan Coulter-Nile. A feather tickle flew to the mid-wicket boundary, giving Kohli his first runs and the rest a teaser of his delectable timing. 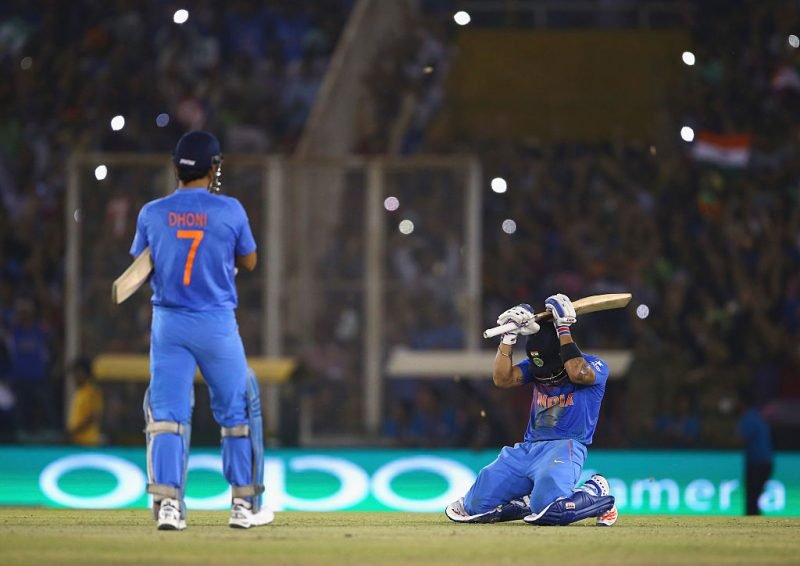 Shane Watson, finishing the final chapter of his T20I career, was straining his creaky bones for one last piece of magic. In back-to-back overs, he foxed Rohit Sharma with a slower one, and rammed one short into Suresh Raina, feeding off his perennial short-ball problems to eke out an edge through to the keeper.

It left India in a sticky spot, at 49-3. Kohli decided to wrap around a tight shield and waited for his chance.

Off his next 11 balls, Kohli hit no boundaries and collected seven runs. Steve Smith decided to cash in on that silence, employing spinners from each end. Between overs eight and 11, India collected just 18 runs.

With 93 needed in nine, Kohli started warming up his engines. An inside-out loft off Maxwell, rather unconvincingly, cleared the fence, and Kohli shifted back to picking his gaps, scurrying back and forth for his hard-earned runs.

A sluggish Yuvraj Singh couldn’t take off, but Dhoni’s entry, at the end of the 14th over, gave Kohli more breathing space. He now had an equal in swift running between the sticks.

In the next three overs, India hit just three fours, but still collected 28 runs. Kohli was working with the angles, and pressing hard for doubles. They looted four twos in the 16th over, two each on either side of the wicket, all making for a colourful wagon wheel. An inspired Watson returned for an eight-run final over, but once Kohli saw his back, he decided to jump into fifth gear.

He crunched three consecutive boundaries off Faulkner; a short, slow ball was disdainfully pulled to mid-wicket, and the very next one was creamed diametrically opposite to it, all along the ground. Even as Faulkner kept trying his back-of-the-hand slower ones, Kohli dropped down the track, and with a straight bat, sent him over long-off.

The next over was decimation with surgical scissors. Kohli carted Coulter-Nile for four fours in five balls, bringing the equation down from 20 off 11 to four in six. A customary Dhoni six wrapped up the chase, but it had already been killed, stroke by stroke, by Kohli at the other end. The baton silently switched hands that night.

Having delectably sliced a full ball through point, and glanced another past short fine-leg, Kohli yanked the game out of Australia’s drooping fist in the 19th over. In the post-match analysis, Shane Warne said that the knock reminded him of a certain Sachin Tendulkar, and there were reasons manifold to suggest so.

One of them came off the fourth ball of the 19th over. In true Tendulkar style, Kohli seemed to have gauged the length as soon as the ball left Coulter-Nile’s hands, waltzing down and crunching a shot over cover’s head. The timing, the power, and the placement, all screamed of a man possessed.

“This innings has to be in my top three, perhaps the top right now, because I’m a bit emotional,” he later said. Few could disagree.