A storm was brewing behind the scenes. But that didn’t stop Kevin Pietersen from producing one of the knocks of the decade.

“At Headingley I was incredibly fragile and emotional,” Kevin Pietersen later wrote in his 2014 autobiography. “This could be my last Test match, I kept telling myself.”

He played like a man at the end (even if it wasn’t), nothing left to lose, one last dance to see himself out. But he was a man hurting. The Twitter parody account called KP Genius had others laughing, but not him. Instead, there were tears on day two “in front of Andy Flower of all people”.

What do we really see when we look out to the middle? We see the bat prod forward, the ball fly past. We can’t see inside, understand the hopes and fears of the actors at play. We can’t see their fragility, and bar the celebration of landmarks, to gauge emotion is a tough ask, too.

In hindsight, it’s easy to see anger in the pull off Morkel, the front foot giving way to let him take on the beanpole quick from around the wicket. There’s a ‘whatever, it’s my last Test’ quality to the drives through cover, the hands doing far more than the feet. 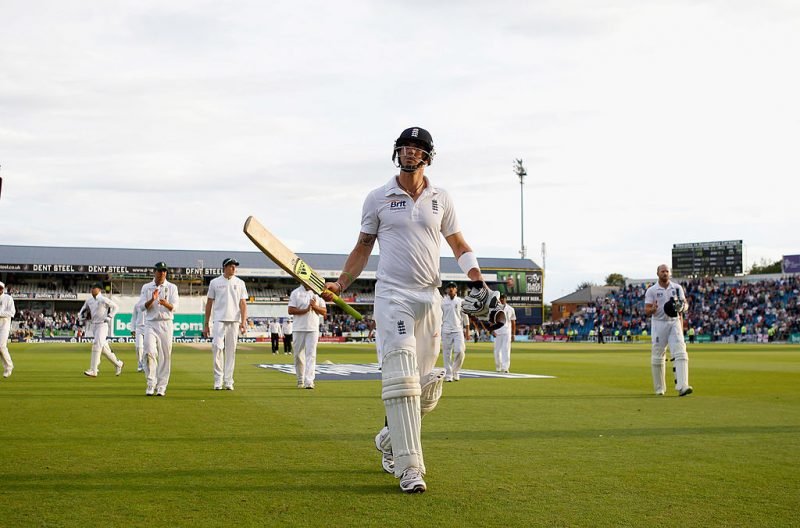 Pietersen leaves the field at the conclusion of day three

It’s not entirely a tragedy, though. There’s joy in the foray down the pitch and whirlwind flourish of the blade to punish Kallis down the ground. There’s the inherent need to entertain with the straight six off Steyn, making you reminisce of the baseball hit against Lee in ’05.

But we can’t read every thought. The only thing inherently clear is the domination of one of the greats. Steyn, fire-breathing, vein-pumping Dale Steyn, was used to being the biggest bully on the playground. At Headingley, Pietersen, a towering presence at 6ft 4in, turned the tables and took his lunch money.

“I’d hit Dale Steyn over his head for six. I’d hit him through extra cover for six. I’d pulled him for six. And I just knew what he was going to do.” It’s an incorrect account from Pietersen: he only hit the one six in his innings. You can excuse Pietersen’s exaggeration this time; Steyn was taken for 12 fours after all. He really did know every move.

As ever with Pietersen, even out in the middle, controversy lurked underneath the surface. On debut, the diminutive James Taylor played a key blocking role at the other end, toughing it out for 104 balls. Still, Pietersen had made it clear to Flower beforehand that at 5ft 6in, Taylor’s stature wasn’t going to cut it at the highest level.

“They say ‘never meet your heroes’, and if ever there was a classic case, KP was it,” Taylor later wrote in his own autobiography.

Related Story: Kevin Pietersen: ‘India should be picking Umran Malik in all formats’

But then again, Pietersen was never the virtuous hero. He railed against the establishment suits, his coaches and teammates. Enigmatic? Probably. Genius? Definitely.

On a length from Steyn, Pietersen’s levers do all the work. To call it a punch would seem distasteful. It’s a glide of sorts, the ball ordered to flow to the midwicket boundary. It’s the most peaceful shot of the innings, zen-like in its execution. Steyn is in disbelief as he walks back to his mark. What fresh hell has he found himself in?