The final day of the inaugural edition of The Hundred concluded with criticism from certain quarters over a now-deleted social post from its official account which suggested that there’s no cricket worth looking forward to until the next season of the competition.

The first edition of the men’s and women’s competition ended with the finals on August 21, with Southern Brave emerging winners in the men’s tournament and Oval Invincibles winning the women’s title. Soon after the trophies were lifted, The Hundred’s official Twitter handle tweeted out a seemingly tongue-in-cheek post signifying the end of the competition:

“When #TheHundred is over and you don’t know what to do with yourself for the next year”, with a GIF of Alex Hales and Rashid Khan sitting in the Trent Rockets dugout.

The post was followed by a clarification from the channel, with a reply to the original tweet saying: “*Personally from admin”.

The post was active for 12 hours before it was deleted on Sunday morning.

The Hundred has been actively promoting its new format, with the idea of bringing new audiences into the game. However, there’s been criticism that there’s been little promotion of other cricket in England via The Hundred’s official channels through the entirety of its month-long competition, despite plenty of high-profile action taking place simultaneously – including the England-India Test series and the One-Day Cup.

There’s also plenty to look forward to for England fans in the coming days, with the County Championship, the Blast quarter-finals, and three Tests of the England-India Test series over the next month. Further, the Charlotte Edwards Cup, the regional women’s T20 competition, continues along with New Zealand women’s white-ball tour of England across September. 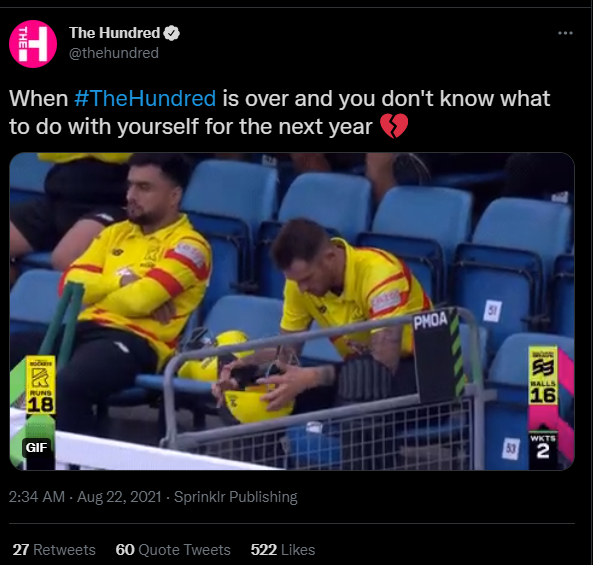 Before the tweet was deleted, several Twitter users pointed out the suggested lack of acknowledgement of other cricket from The Hundred’s official channel.

How about…#TheHundred is over, but why not check out out all the other cricket that’s happening this summer – including games at your local cricket club. https://t.co/tuP6VDhz6w 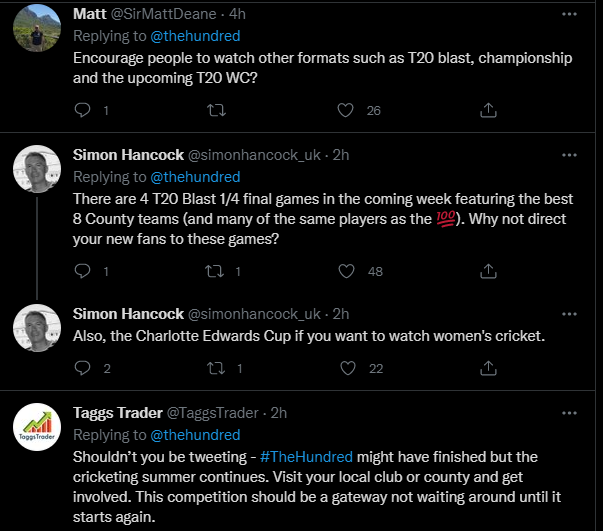