Footage taken from the crowd shows that Hampshire illegally changed the field for the final delivery of the Saturday’s T20 Blast final, a move that, if penalised with a no-ball, would have handed Lancashire the title.

Hampshire won Saturday’s final against Lancashire by one run in dramatic, controversial circumstances. James Vince’s side initially believed they had won the tournament after Nathan Ellis clean bowled Richard Gleeson off the final ball of the match.

However, the celebrations were curtailed as it was revealed that Ellis had overstepped, resulting in Lancashire being awarded two runs, with the final delivery to be re-bowled as a free hit.

Rule 21.2 of the ECB T20 Blast playing conditions states that: “Field changes are not permitted for free hit deliveries unless there is a change of striker or the No Ball was the result of a field restriction breach in which case the field may be changed to the extent of correcting the breach.”

There was controversy over the final ball itself, with the Lancashire camp claiming they had completed two runs, with a tie guaranteeing them the final, only for the umpires to signal that the ball was dead after the first run. The MCC, cricket’s lawmakers, have since released a statement exonerating the umpires of any mistake on this front.

However, the MCC made no comment on the free-hit field-change, an ECB playing condition rather than an MCC law, with England and Lancashire bowler Saqib Mahmood suggesting an illegal field change had been made. This was seemingly confirmed by Ellis in a post-match interview with Sky Sports. “We put a midwicket in,” the Australian said of the final ball.

So much going on that last ball but still can’t get my head around how you don’t go to the third umpire to check the runout. Also I’m pretty sure the field for the free hit was not the same as the no ball, backward point moved to mid wicket, is that allowed?

Replays show that there was no midwicket in place before the no-ball, but Sky’s coverage did not reveal if there was one in place for the free-hit. However, fan footage taken at the ground shows clearly, when compared with footage of Sky Sport’s coverage of the previous delivery, that Hampshire had indeed changed the field illegally. 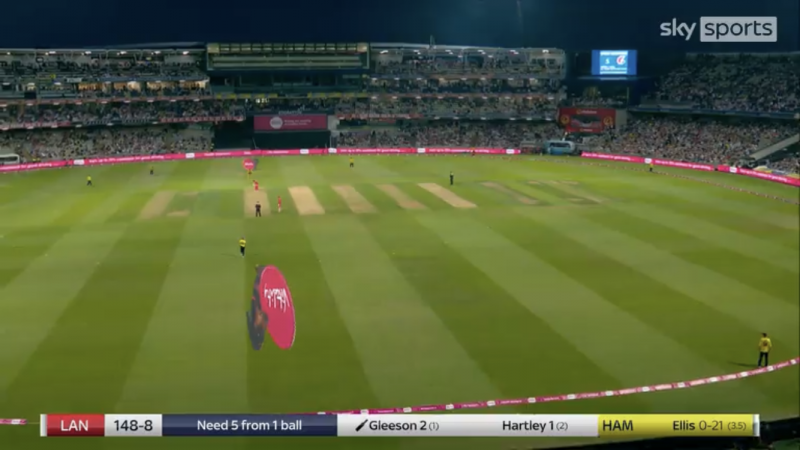 Before Ellis’ no-ball, no midwicket was in place

It is not entirely clear what the penalty would have been, had this been noticed. T20 Blast playing condition 28 states, “In the event of an infringement of any of the above fielding restrictions, the striker’s end Umpire shall call and signal ‘No Ball’.” However the ‘free hit’ condition is not part of condition 28. Had the umpires signalled a second no-ball following the delivery, the two extra runs would have seen Lancashire win by two wickets.

Despite being missed at the time, had the umpires been alerted to the change in the immediate aftermath by Lancashire’s batters a no-ball could still have been awarded. Condition 28.7 states: “In the event of the striker’s end Umpire failing to call and signal No Ball when the fielding restrictions in this playing condition have been breached…immediately the ball becomes dead the striker may draw the matter to that Umpire’s attention. If the striker’s end Umpire is able to verify the breach he shall call and signal No Ball.”

It is not unheard of for this to be the case, with a similar scenario occurring in last season’s semi-final in which Hampshire’s Joe Weatherley was out caught before alerting the umpires to the fact that opponents Somerset had only three fielders in the 30-yard circle.

Watch: Fan footage confirms midwicket was put in for the final delivery

you won, Hampshire. enjoy the money, I hope it makes you happy. dear lord, what a sad little life, Hampshire. pic.twitter.com/nsRTE1YHRo