Former Kent skipper Sam Northeast, who captained Yasir Shah during his time at the club in 2017, has revealed how the Pakistan leg-spinner once ignored his advice by pretending to not understand what he was saying.

Speaking on the latest edition of Two Hacks, One Pro podcast, Northeast recalled the instance from Kent’s game against Worcestershire, one of three games Yasir – then the top-ranked Test spinner in the world – played in the Championship.

“We had Wayne Parnell for the start of the season and then he went, and then we were having Adam Milne come a bit later,” Northeast said. “We had that gap and Yasir Shah was the only player available at that time, and when you’ve got the No.1 ranked spinner in the world it’s quite hard to turn down.

“It was at Worcester and it was probably one of my worst days as captain I reckon. We set Worcester 400 [399] to get in a day. I had Yasir Shah, and I had the best night’s sleep, thinking ‘This will be over by lunch.’

“Anyway, they’re one down at lunchtime and Yasir has not broken through, so I am trying to talk to him about different fields and how to bowl and he’s pretending that he doesn’t really understand me. So I’m like ‘Yasir!’, and he doesn’t really look interested. He’s having a full-blown conversation with someone else in English and I am like, ‘What’s going on here? He’s not listening to me at all!'” 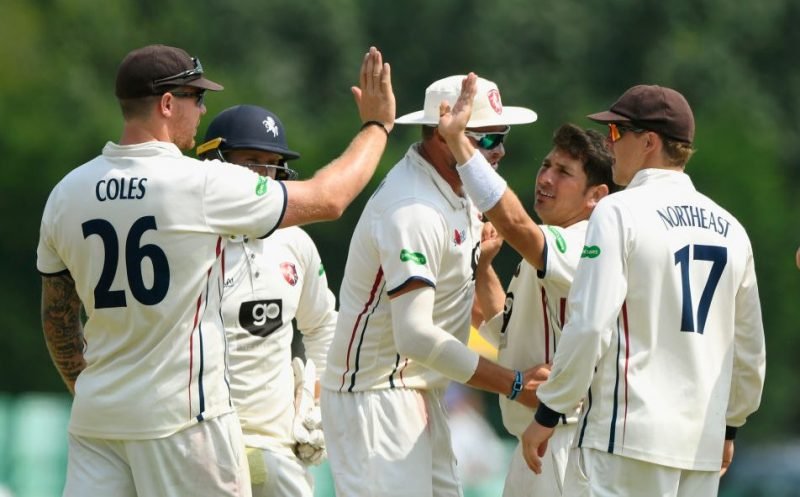 Yasir Shah ended with figures of 5-132 in the game

“It’s lunchtime and I am looking at his videos of his five-fors, and thinking ‘this guy’s gonna rip through them at some stage’. The rest of the guys come to me saying he needs to bowl slower, and I am like ‘I am trying to tell him, he doesn’t want to listen! He is No.1 in the world for a reason so I’ll just let him crack on.’ Anyway, they won it.”

A 175-run stand between Daryl Mitchell (142) and Joe Clarke (110*) eventually steered Worcestershire home, but not before Yasir weaved his magic and nearly turned the game around.

“He started bowling slower after tea, he hadn’t had a wicket before that. Clarke and Mitchell batted unbelievably well so the game was pretty much done,” Northeast said. “He started bowling slow and it was ragging – he got six-for [five wickets] in about 20 mins and we nearly crawled back into the game, but still lost it. My captaincy wasn’t brilliant that day. So, It doesn’t always work when you have the best spinner in the world!”

You can listen to the full episode of Two Hacks, One Pro on the Podcast App and other podcast streaming channels. You can follow them on Twitter here.