Rob Johnston looks back on Sussex’s double-winning campaign of 2006, a season that featured their second of three Championship title wins in the space of five years.

There were significant changes at Sussex ahead of the 2006 campaign. Peter Moores, head coach since 1998, left to take up a position with England with his assistant Mark Robinson stepping up to replace him, while veteran seamer James Kirtley had been banned for a suspect bowling action and former England batsman Ian Ward swapped his whites for Sky Sports chinos.

Sussex did, however, still have a trump card up their sleeve. Pakistani leg-spinner Mushtaq Ahmed had taken over 100 Championship wickets in their 2003 title win and in 2006 he was set to replicate the feat as the club got back to trophy-winning ways.

What were your expectations ahead of the 2006 season?

Mark Robinson (head coach): It was quite intimidating taking over from Peter who was revered within the club. We actually hadn’t had a very good 2005 season. We flirted with relegation, although we finished reasonably well, and had been knocked out early in the one-day cups.

Chris Adams (captain): There was a lot of change. I joined in 1998, Peter’s first season as coach, and we were the architects of building the team that would win in 2003. I remember Mark in pre-season not saying a lot or putting down too many markers on the squad, but trying to continue the ethos that Peter and myself had set out.

Carl Hopkinson (opening batsman): Chris and Robbo sat me down and said: ‘We’re going to open the batting with you this year, and give you a bit of a run and see how you go.’ I was just a young player trying to get a few scores in what was my first proper season in the team.

CA: It was an incredible start and in any other season, if you had had a start like that, the Championship would have been over. But in that era there was another great side in Lancashire who somehow kept pace with us and it became a two-horse race very quickly.

MR: We’d looked at it and in 2004 and 2005 we hadn’t started well which had probably cost us. So we really made a big effort with all the players to start well. We got some stats to back up things and we tried to simplify what we wanted to do in terms of targets.

CA: We’d built up this rivalry with Lancashire because we were both very good teams. Their team was stacked with incredibly talented and experienced players [including Mal Loye, Stuart Law, Glen Chapple, Dominic Cork and Gary Keedy]. We were equally as strong but didn’t quite have the international experience that they had.

Mushtaq Ahmed was in sensational form, taking 103 championship wickets. Can you describe his impact to the team?

CH: He always used to like to take a youngster under his wing and I was like Mushy’s personal driver for the season. He nicknamed me ‘Young Lad’ and whenever I bump into him now he still calls me it. He would talk to me in the car when we travelled and always give me confidence and make me relax. I always think his religion helped him to do that. 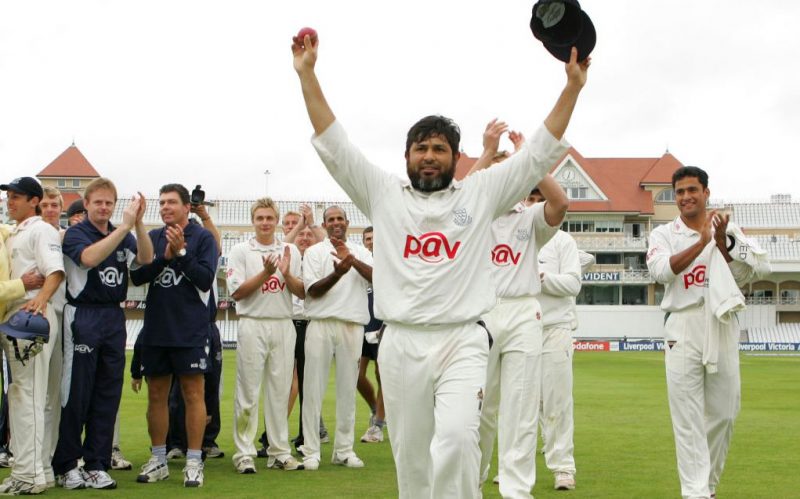 MR: When you’ve got a player of that ilk, you know that in reality you’re not going to go down because you’ve got an individual that can win you games on his own. Then you need the rest of the team to get you over the line and help to win trophies, which they did. He was a fantastic person; very humble and a great influence around the whole club, not just the dressing room.

CA: We had signed Rana Naved-ul-Hasan as our second overseas player and the combination of both him and Mushy, allied with two Sussex stalwarts in Jason Lewry and Robin Martin-Jenkins, meant we had a phenomenal bowling attack. Those guys were in a different league that year.

It didn’t take me long to work out how to handle Mushy the bowler. During his Pakistan career he had become used to coming on after Wasim Akram and Waqar Younis had made inroads with the new ball and bowling to ultra-attacking fields. He was expected to take wickets, even if it meant he sometimes could be expensive. That tactic would not suit us. We needed him to bowl lots of overs so our seamers could rotate at the other end and attack in short, sharp bursts.

There is this myth about Mushy that he took the bulk of his wickets for us with an exotic concoction of googlies and flippers. In fact, I reckon about 60 per cent of his Sussex wickets came from straight balls. Leg-spinners were rare in county cricket, particularly ones of his quality, and he just loved bowling.

During his six seasons with us I only saw two batsmen pick Mushy – Darren Lehmann of Yorkshire and Kevin Pietersen, when he was with Nottinghamshire

What made the difference that season?

MR: When you’ve got good players, it makes things easy. You take players like Murray Goodwin, Rana and Mushtaq, as well as an experienced captain, and we had many of the right ingredients for a very successful team. We were lucky, too. Mushy could win you games on any surface, at any time, and he would bowl his overs and not only take wickets but contain as well.

CH: I was very fortunate in that I played in an extremely talented but also quite experienced team. It was a real winning culture, which is obviously enjoyable to play in. There was a real togetherness and family atmosphere at the club.

Your rivalry with Lancashire shaped that season and culminated with a brilliant win against them in the C&G final at Lord’s, winning by 15 runs after being dismissed for 172. What do you remember from that day?

CH: The Lord’s final itself was a real blur of a day. It was an absolute full house, which you don’t get so much anymore in the domestic one-day final. It was the first time I had ever experienced playing in front of that sort of atmosphere and level of pressure. I felt so nervous walking out to bat. 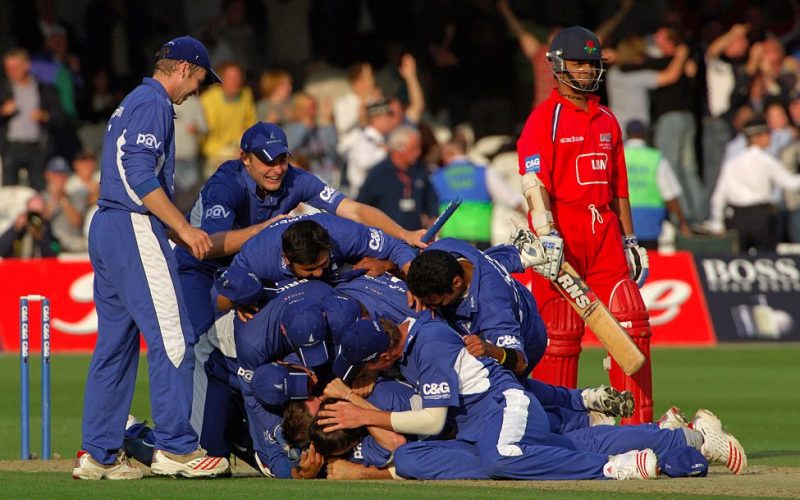 CA: We were in deep trouble and some supporters had had problems with the trains. Quite a few of them that had got stuck were listening on the radio and decided to turn back and go home! We managed to get a score on the board, though, and then it was one of those days where everything James Kirtley [whose action had by now been remodelled and cleared] did just worked. Every member of the unit bowled beautifully that day. James will always take the credit for the five-fer but I remember Mushy bowled an unbelievable spell in the middle.

MR: There was a possibility James might not have played in that game but Chris and myself were keen to back him. He showed so much courage to win us a game that we probably shouldn’t have won.

CA: We did a lap of honour and it raises the hairs on the back of my neck to think just how much those days meant to a great many supporters. It was one of the greatest feelings of my life. Awesome. 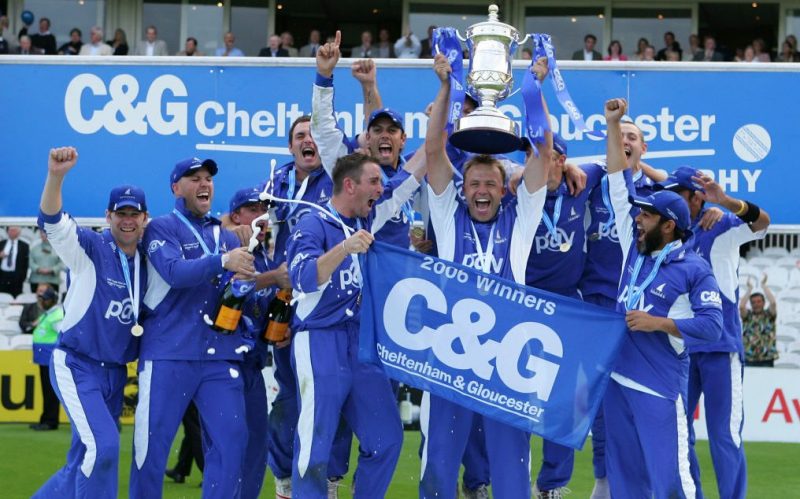 You just missed out on a treble after losing your final Pro40 League game. How much of a regret is that?

MR: We should have done the treble. We had a Pro40 game against Notts before the final Championship game and I think we’d written that off a little bit. We were massively distracted, arguably quite rightly so, with the opportunity to win the Championship the next day.

CA: We had a very good one-day team and guys that knew what they needed to do. It was just about making sure that they were clear about that every game. Doing the treble would have been awesome but I think we had our eyes on the Championship and we just didn’t turn up in that last game.

What are your overriding memories of that season?

MR: It was fantastic because it was my first year. My mum and dad came along to the final game at Notts, and I’ve now lost them both, so to look back fondly and think that they were there as proud parents to see their son in charge of a team that won the double makes me very proud.

CH: All the memories that I have are more about us as a group. Playing with the likes of Martin-Jenkins, Richard Montgomery, Lewry. Even though I don’t see them much anymore, when we do meet up, we always have those memories together which is special.

CA: It was a different experience to 2003. That year we’d won it at home so there was a big home crowd and enormous celebrations. This was very different. It was at Trent Bridge and we probably had 50 to 80 travelling supporters who stayed with us throughout the afternoon celebrating. Times like that are why you play the game.