Glenn Turner may have had his run-ins with the suits in New Zealand cricket, but for Worcestershire, he was a model professional and relentless run-scorer, writes Rob Johnston.

New Zealand opener Glenn Turner played 41 Test matches and 41 ODIs, but it’s his 15-year Worcestershire career for which he’s best remembered. In terms of weight of runs, Turner deserves to be ranked as one of the very best overseas batsmen to have graced the county game. 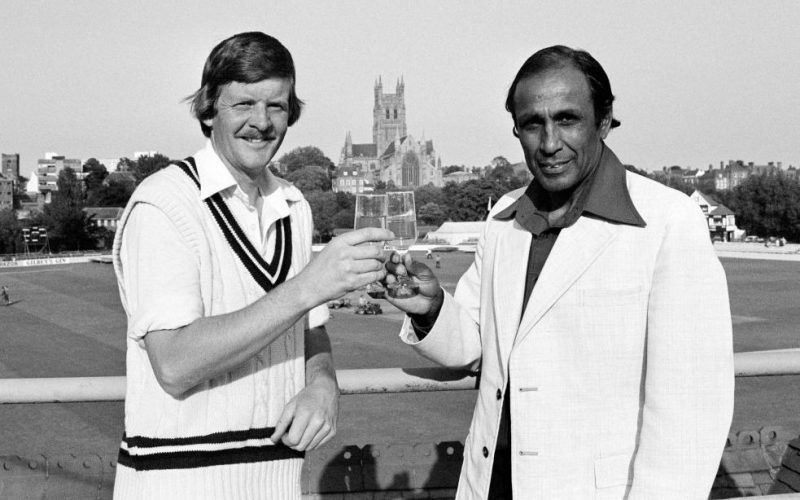 Glenn Turner (left), enjoying a glass of champagne with his mentor Khalid ‘Billy’ Ibadulla, after scoring his 100th first-class century during the 1982 County Championship

Having endured criticism early in his career for scoring too slowly, that fluent triple hundred was vindication of his skills. Phil Neale, however, a former Worcestershire teammate, says such criticism was overplayed. “I was told that in the early days, he couldn’t hit the ball off the square,” Neale tells AOC. “By the time I started playing with him, he had clearly got past that stage. He wanted to personally score at two-an-over, and he pretty much managed to do that on any type of pitch, against any type of bowling. This helped us win a lot of games. If we batted first, he got runs on the board quickly enough to give us time to bowl the opposition out. If we were chasing, he was a master at judging the pace of an innings and guiding us to victory.

“He had great ability, excellent concentration and a real determination to do well. He got every ounce out of his talent. Glenn was meticulous in his practice and preparation. He worked hard on his fielding and turned himself into a very good first slip.”

In 1973, Turner became the first player since World War II to score 1,000 first-class runs in England before the end of May – a feat only matched since by fellow Worcestershire batsman Graeme Hick – and Neal remembers a cricketer who was always pushing batsmanship to its limits.

“He was the first guy I saw play the chip shot over the infield for two runs. I was at the other end when we ran six twos in one over from John Barclay, the Sussex offspinner, doing just that. He played the hook shot keeping his head perfectly still and looking down the wicket even after he had hit the ball. This led some bowlers to say he was not looking at the ball, but that was the only thing he was looking at. Once he had hit it, he knew where it had gone and didn’t need to watch it go over the boundary.”

Named Wisden Cricketer of the Year in 1971, the yellow tome’s write-up describes Turner as having a “stubborn streak of personality”, and while he had several run-ins with administrators, one of which ultimately led to his resignation as New Zealand captain, Neale found him to be an excellent teammate. “He had a good sense of humour and enjoyed a joke. The one thing I really admired about him was that he was consistent in his behaviour, whether he got 0 or 100. He would come back into the dressing room, sit down quietly, take off his pads. No histrionics over a bad decision.

“He was always prepared to chat to young players and share knowledge with them, as most senior players did. I was able to learn a lot, batting with Glenn over the six seasons that I played with him, particularly with regard to playing spin.”

Related Story: How did India and Pakistan’s stars fare in the latest County Championship round?

Recollections of county cricket’s best overseas players often involve formidable West Indian quicks or swaggering Australian stroke-makers. But Glenn Turner – Kiwi run-machine – deserves to be ranked alongside any of them.