A County Championship Team of the Season with a difference, put together not due to hunches or aesthetics but with CricViz analytics and data. Ben Jones explains the choices.

Dom Sibley has had a cracking year. 1324 runs at the rather healthy average of 69.68, whilst opening the batting in Division One, is a staggering performance. Indeed, over the last decade, only one man (Marcus Trescothick in 2011) has averaged more whilst opening in a Championship season. What’s equally impressive is that despite facing the new ball in every innings, his newly adapted technique has allowed Sibley to still average 76.28 against the seamers he’s faced this season – a remarkable figure for an opening batsman. As expected, Sibley’s achievements didn’t go unrecognised, and a Test debut beckons this winter. 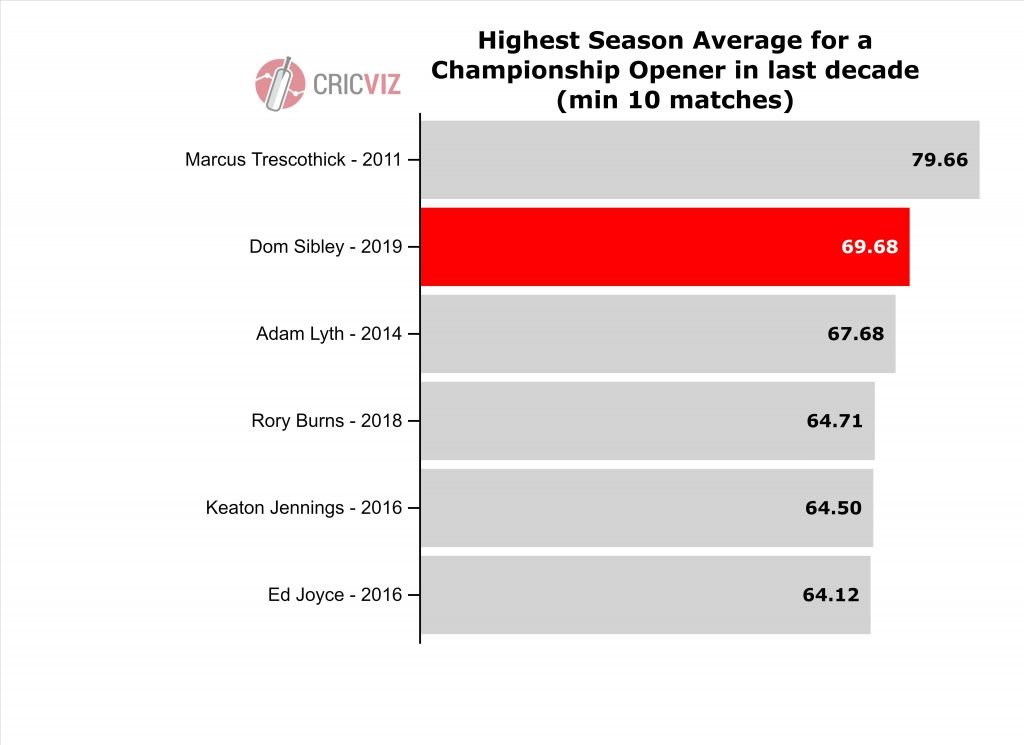 A man in his first ever County Championship season, Hasan Azad has made an immediate impact by seeming comfortable performing the hardest task in English cricket – getting through the new ball. In the first 20 overs of innings this season, Azad has a dismissal rate of 154 deliveries, the best of any opener to play in at least five matches. It’s the most important skill for an opening batsman to have, that ability to get through the tough early spells, and Azad seems to have it in spades. 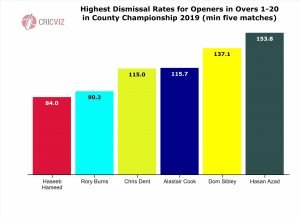 Sam Hain has broadly made his name in List A cricket, but this season he has been almost as impressive in red ball cricket. He only played 10 per cent false shots, the lowest of any player to make five appearances in the season – the control and security which typifies his limited overs batting has been on display in the longer format, and it’s taken his game to new levels. Nobody has batted with less risk. 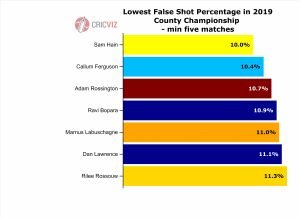 Ravi Bopara only averaged 39.53 with the bat this season, and his inclusion in this team might have a few of you scratching your heads. However, he has played with the sort of class we’ve come to expect from the Essex man, and his runs have been compiled immaculately. His Contact Average (a measure which places greater significance on shots that resulted in a clean connection, and less significance on runs from edges and mis-timed shots), is a whopping 50.90, the highest of anyone in either division. This suggests that Bopara has played far better than his still-rather-good batting average suggests.

The most exciting young batsman England has produced since Joe Root, Surrey youngster Ollie Pope had an injury-interrupted 2019 season, but still managed to dominate. Eight innings, 561 runs at an average of 80.14, was enough for Pope to promote his case enough to get a seat on the plane to New Zealand; his FC average, now standing at 58.79, is the highest ever for an Englishman to have played 30 matches. Surrey fans will have enjoyed seeing him over the last month or so, because they may not see much of him in the coming summers.

Dane Vilas has been the outstanding wicketkeeper batsman in the Championship this season. A class above whilst Lancashire have been down in Division Two, his batting average of 80.66 is miles ahead of what any other keeper could offer – nobody else in either tier has averaged over 50. He also absolutely battered the spinners who dared to bowl to him, averaging a whopping 285 against spin bowling this season – the most of anyone to face at least 100 deliveries from such bowlers. 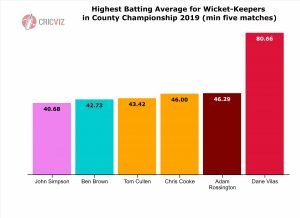 Darren Stevens has had another successful season, so good that he’s had his Kent deal extended by another year. Whilst his batting has attracted the social media clicks and retweets that often accompany more attention-grabbing achievements, his bowling this season has been remarkable – particularly with the new ball. His bowling average of 13.58 in the first 20 overs of the innings was the best for any bowler in Division One, his skillful seam and swing still doing the business after all these years. Combined with the 597 runs he’s accrued across the season, he’s a lock.

Lewis Gregory was close to this being his breakthrough season in international colours, but had to settle for being a destructive force in another cracking season for Somerset. Second only to Kyle Abbott in the Division One averages list (though topping it against only right-handed batsmen, averaging a staggering 13.10 against them), Gregory’s class with the ball has shone through. With the bat, it’s been his power which has come to the fore; of the 94 players to score as many runs as him this season, the only other Division One batsman to score more quickly than Gregory was Rilee Rossouw, another man with international experience. Gregory seems like a man ready for the next level. 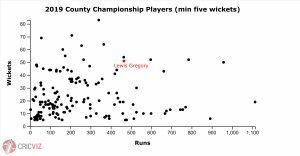 Kyle Abbott took 71 wickets this season, at an average of 15.73; only eight times this century has a seamer taken more wickets in a Championship season, and only one of those campaigns (Matt Henry last season) saw them come at a lower average. Abbott has exuded class and the sense of being a level above the Division One players he calls colleagues, in the manner of a returning international – funny, that.

Related Story: Who was the player of the County Championship group stage? Wisden writers have their say

Simon Harmer has had quite the year. Title winning campaigns in the Blast and the County Championship, he’s been the focal point for a lot of the good work done down at Chelmsford this season. Whilst his raw numbers are obviously outstanding, it’s been the way he’s turned things up at the moments he’s needed to – just like a great overseas pro should. In the first innings of matches, he’s averaged a perfectly solid 26.54, but in the second innings when pitches have started to turn and Essex have looked to their Test quality spinner to show his class, he’s averaged 12.27. Just as he did on Finals Day, Harmer has been able to show up when he’s been needed most.

Ollie Robinson has been tearing it up for Sussex, despite the South coast side failing to achieve promotion. He has caused batsmen more trouble than almost anyone else in red ball cricket this season; his Contact Average, 15.7, is the best of anyone to appear 10 times in the Championship this season. He’s found the edge of the bat, or passed it, more often than any other bowler in domestic red ball cricket this season, even more so than James Anderson – 25.1 per cent of his deliveries this year brought edges or misses. 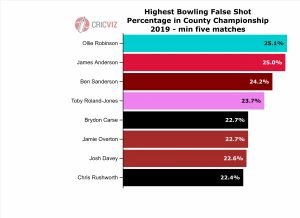 If Robinson was a tearaway quick recording these numbers, he’d be the subject of a bidding war for top-tier sides and would be banging down the door of England selection – as it is, he seems to be quite happy dominating at domestic level.