Of all the trophy-laden eras in the history of Yorkshire County Cricket Club, the period between 1959 and 1968, in which the county won seven Championship titles, was arguably their finest, writes Paul Edwards.

For most of the 20th century Yorkshire were expected to win the County Championship and the Conservative party was expected to win General Elections. But when success was not forthcoming both organisations were prone to tear themselves apart as rivalries concealed by achievement led to internecine strife. And there were a few years at both Headingley and Westminster when even triumph could not prevent a stramash.

One can be well-versed in the history of county cricket and still be stunned by the statistics. Since the Championship was constituted in 1890, Yorkshire have won 32 outright titles. The next most successful club is Surrey, who have won it 18 times. When Philip Bailey analysed each county’s results in the 20th century for the millennial Wisden Almanack, he discovered that Yorkshire had won 1,001 of their 2,331 matches.

The White Rose’s victory percentage (42.94) was over six points higher than their nearest rivals, Surrey; their loss percentage (15.05) was nearly five points lower. Whereas teams such as Hampshire and Glamorgan greeted the arrival of their first Championship titles with fanfares and dinners, Yorkshire’s players acknowledged another title as hardly more than par for a course they knew well. Then they celebrated it.

The White Rose measures success more by great eras than occasional glory. Only Lancashire, Surrey and Yorkshire have completed three consecutive Championship titles. Lancashire have managed the feat once and Surrey have done it three times, two of them being achieved in the 1950s when the side led by Stuart Surridge and Peter May won six on the trot. Yorkshire have done the hat-trick five times in four different decades. It looked like being six in five until Toby Roland-Jones and his colleagues spoiled Jason Gillespie’s going-away party last September.

Yet in the last 30 years of the century Yorkshire did not win a single Championship. As Stuart Rayner chronicles so well in his book, The War of the White Roses, the county was convulsed by civil strife for much of that period. However, that only throws the club’s superiority during the first seven decades into even sharper relief. Of the 60 Championships contested between 1900 and 1969, Yorkshire won 26 and shared another.

The vast majority of these titles were won during the county’s decades of dominance and one of the very greatest of these was the period between 1959 and 1968, when the team captained by Ronnie Burnet, Vic Wilson and, most notably, Brian Close, won seven titles. Skippers came and went; English cricket abolished the distinction between amateurs and professionals; the points system changed and so did hairstyles. Yorkshire’s dominion remained.

So when rain delays play at Headingley or Scarborough and home supporters debate which county team was the best of all time, they are really weighing up which Yorkshire side takes the palm. Surrey? “Aye, mebbe, they weren’t bad, that lot.” Lancashire? “Don’t be bloody daft.” And after appropriate genuflections have been made to Lord Hawke and Brian Sellers, our informal discussions often find in favour of the Yorkshire team which dominated the 1960s and were only seriously challenged by Don Kenyon’s Worcestershire, who won successive titles in the middle of the decade.

Paul Edwards takes us back to the first Golden Age for the club.https://t.co/JWU2NleEY9

You might think that no team which wins seven Championships in 10 seasons can be dependent on one squad of players. Surely there are inevitable changes as some cricketers age and others emerge to take their places. So what is remarkable about that great Yorkshire team which carried most things before it in the 1960s was that seven of the side which won the title in memorable fashion at Hove in 1959 were also in the line-up when the Championship was retained at Hull in 1968.

All seven played in at least 18 of Yorkshire’s 28 games in both 1959 and 1968. Three of them – Close, Ray Illingworth and Fred Trueman – remain well-known on account of their England careers. The other four played only a handful of Tests apiece, but Ken Taylor, Doug Padgett, Don Wilson and Jimmy Binks were all outstanding cricketers.

Binks, in particular, was widely regarded as the best wicketkeeper in the country, a judgement with which the great Yorkshire bowler and cricket writer Bill Bowes rather agreed in the 1969 Wisden Almanack. “As a wicketkeeper Binks would undoubtedly have played in more representative games had he been more noisy and flamboyant,” wrote Bowes. “The compliment about being little noticed is that there can be no mistakes.” 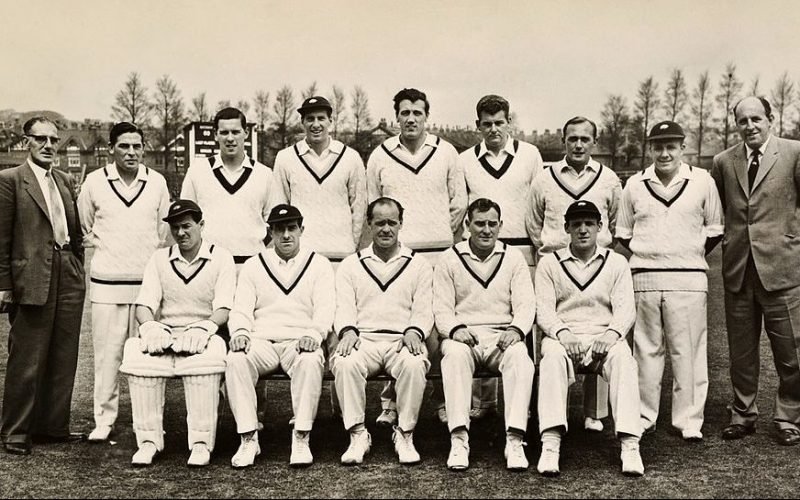 The 1963 Championship-winning side, captained by Brian Close (front row, centre)

And yet, just as one is looking to praise one of Yorkshire’s most unobtrusive yet most effective cricketers, a familiar domed head appears and it is demanding one’s attention. Even in the years when he was not Yorkshire skipper, Brian Close was never far from the centre of events. He enjoyed playing under Ronnie Burnet, who listened to his advice, but was nothing like so happy under Vic Wilson, who had the radical notion that being captain gave him the sole right to make changes in the field. Close, who was constantly looking to make things happen, disagreed with this conception of leadership. Burnet won one title in his two years in charge and Wilson another couple in his three seasons at the helm, but that made little difference to Close’s view.

“He was a farmer and you know what farmers are like,” he said of Wilson. “They take three months to decide the grass needs cutting.” The autocratic chairman Brian Sellers finally appointed Close as captain in 1963 and he went on to win four titles in eight years before he was sacked in favour of Geoff Boycott. His view of Yorkshire’s glorious decade remained unashamedly simple: “I did all bloody seven really,” he said.

“The memory of it still gets to my heart and soul. It will be with me forever”

But if Yorkshire were the best side in the country in the 1960s, they were rarely far ahead of the rest. Six of their seven titles were won in the final game of the season when the White Rose players did what was necessary to stay ahead. They knew what a ‘title run-in’ was about, although they might not have referred to it in such terms, and some of them probably welcomed the pressure that came with being the centre of attention. Rarely, though, was the focus quite as sharp as at Hove on September 1, 1959, when Doug Padgett and Bryan Stott added 141 for the second wicket, thus enabling their side to score 218 off 28.3 overs in 98 minutes and win by five wickets with seven minutes to spare.

That victory ended Surrey’s dominance and secured Yorkshire’s first title for a decade. Burnet’s players had to travel to Scarborough the same evening to be ready to play in the Festival on the following day. When they arrived at 2am, great crowds were waiting for them. “The memory of it still gets to my heart and soul,” Stott said. “It will be with me forever.” 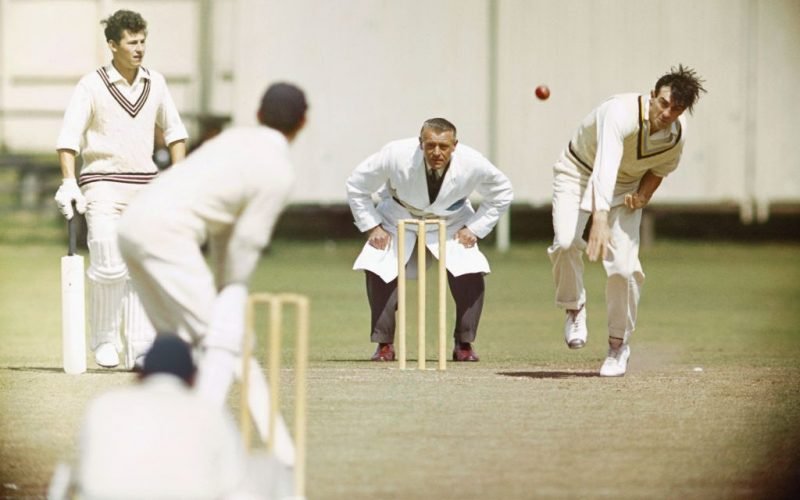 Fred Trueman in action against Somerset, circa 1965

Stott’s phrase has a resonance beyond romanticism. Cricket was a “heart and soul” thing in Yorkshire and in many respects it remains so to this day. This was noticed by the Nottinghamshire-raised Duncan Hamilton even as he watched the county rip itself apart after their last great era.

“It seemed to me that nowhere else was so absorbed in cricket or regarded it so earnestly; nowhere else studies it so thoughtfully or followed it with such obsessive passion, as if the scorecards were parchment scripture,” he wrote in the introduction to Wisden on Yorkshire. “Those who played or merely observed cricket in Yorkshire were sure of, and never lost, an appreciation of where they came from and the proud firm sense of self it gave them.”

Such an approach is easy to caricature and even easier to mock. Yet in the 1960s it found physical expression in that great seam bowler, Tony Nicholson, rumbling up the hill at Scarborough; or in the courageous and selfless batting of John Hampshire; or in the almost absurd brilliance of Phil Sharpe’s slip catching; and, yes, it could also be seen in Close’s bowlers taking an hour and 40 minutes to bowl 24 overs at Edgbaston in 1967 when Warwickshire needed 142 to win but failed by nine runs. The Yorkshire skipper was castigated by some in the press and most in the Establishment for time wasting. He lost the England captaincy, too. But he claimed that the delay had been caused by the continual need to dry a wet ball and he never apologised. As if.

In a 29-year career which stretched from post-war austerity to punk rock he scored 34,911 runs, took 1,168 wickets and pocketed 811 catches, yet was still viewed as someone who failed to fulfill his promise. According to Christopher Martin-Jenkins, as both a batsman and short-leg fielder “Close’s courage was almost blind – the type which won VCs in wartime”.

When all the splother is dispensed with, Trueman’s 2,304 first-class wickets remain, as does the memory of his magnificent action and sharp cricket brain. He was a deeply proud Yorkshireman and one of the most skillful fast bowlers England has ever produced.

Sharpe was so gifted a slip fielder – 617 first-class catches – that one may be forgiven for not noticing his 22,530 runs. A mainstay of Yorkshire’s team in the 1960s, he remained utterly still at slip but possessed reactions so quick that he could catch the ball late and gently, as if welcoming it home.

Incurably besotted with cricket, Wilson was recommended to Yorkshire by Sir Leonard Hutton after he had bowled the great man in a pre-season match at Settle. His slow left-arm bowling earned him 1,189 first-class wickets and he was also a fine fielder. He was later head coach at Lord’s for 14 seasons.

In many respects Yorkshire’s Championship win in 1968 marked the end of an era. (They also won the Gillette Cup in 1965 and 1969 but few people in the Broad Acres, least of all Close, thought that mattered very much.) When Ray Illingworth asked Yorkshire for a three-year contract, Sellers told him: “You can go, and take any other bugger with you.”

Yet Illingworth was only reflecting the increasing self-confidence and self-worth of the professional sportsman. The days when those like him would be satisfied with Berni Inns, schooners of sherry and average wages were over. Illingworth went to Leicestershire, became captain of England and won the Championship with his new county.

When Yorkshire next won the title, in 2001, they had abandoned the policy of selecting only cricketers born within the county, a self-imposed handicap upon which they frequently commented but secretly, one feels, rather welcomed because it made the county even more special. As special, perhaps, as Close’s men, who travelled around in England in the 1960s, winning County Championships as if such things came naturally to them.