That England are considering moving their underperforming opener Jason Roy to the middle order for the fourth Ashes Test is down to successful execution of Australia’s bowling plans, according to fast bowler Josh Hazlewood.

Roy, a crucial member of England’s World Cup-winning side earlier this year, has struggled to take his white-ball form into Test cricket. He has scored just 57 runs in six innings, and his average as a Test opener is a measly 8.85.

Roy’s only fifty in Test cricket, though, came against Ireland, from the No.3 position. It has led to serious considerations from team management to push him down.

Morale is high in the Australia camp ahead of the fourth #Ashes Test at Old Trafford, according to paceman Josh Hazlewood. pic.twitter.com/3fNJjDBfMU

“Whenever the other team’s changing plans, it means you’re doing something right,” Hazlewood said.

“Whoever’s at the top or whatever’s the order, it’s the same plans as before. Keep it simple, [be] patient, disciplined. They’re all quality players and we’re going to be wary of them. Especially with what we saw with Stokesy and even Jonny at certain times. We’ve got some good plans in place and, hopefully, we can execute them.”

Hazlewood missed Australia’s World Cup campaign, after he had sustained a back injury at the start of the year, as he was being preserved for this series, where he has made a terrific comeback. The 28-year-old has snared 12 wickets in two Tests so far, at an exceptional average of 18. 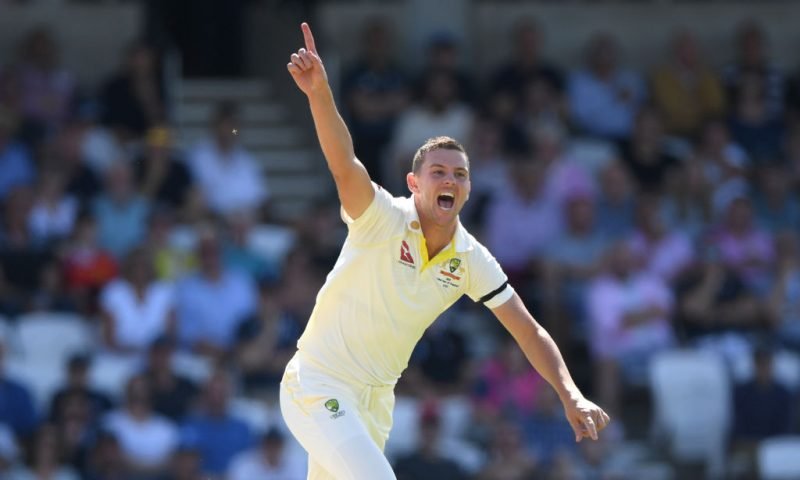 Hazlewood began with a three-wicket haul in the first innings of his comeback Test, at Lord’s, and followed it up with a spectacular match haul of 9/115 at Headingley.

“The body’s really good. I felt a lot better at Headingley than Lord’s, just getting those miles into the legs in that first Test [back],” he said. “I think I’m not trying to do too much, trying to be pretty simple, not trying and swing the ball at all really, occasionally I do when it gets a bit older.

“But just hitting that right length with the new ball, making them play, not trying and do too much, keep it simple.”

Josh Hazlewood was superb for Australia, picking up figures of 5-30.

How was he left out of the Australia XI for the first Test?!#Ashes pic.twitter.com/BDzOw1Z9Xh

Before the Ashes, Hazlewood was busy regaining match fitness with the Australia A team, who were also touring England during the World Cup. It took him time to get to his best – he returned two wickets in as many innings in the squad’s internal practice game – but found his groove with a 3-34 in a warm-up game against Worcester.

Despite the workload, the pacer said he’s okay to go the full distance and play the rest of the series. “I can’t see why not, unless we bowl a mountain of overs in the next game, but body’s feeling really good and happy to play both if possible,” he said.

“It certainly feels like I’m bowling well. Ever since I bowled at Worcester a few weeks back, I took it into Lord’s and into Headingley.”