Before England and New Zealand were involved in the final of all finals at Lord’s last year, there had been quite a few that qualified for cricket’s greatest titanic ties.

Whether it’s a T20 slogathon, a nip-and-tuck 50-over match or an ebb and flow Test, there are few greater thrills in the game than a match rising to a tantalising last-ball crescendo, only for the sides to remain deadlocked at the last. Here’s a look at some of the most memorable titanic ties.

Back in the good old days, West Indian fans used to tear the playhouse down. One such pitch invasion occurred at the end of the deciding ODI of the 1993 series against the world champions Pakistan. Local lad Carl Hooper had batted with ridiculous ease to get his team close, but Wasim Akram came roaring back, leaving Hooper to find two runs from Akram’s final ball. Hooper drills it to long on, taking one and turning back for the winning second. But by the time the ball comes in to Wasim, the crowd has converged on the pitch to impede Wasim’s view. The match referee has no option but to award the West Indies their first run and to scrub the second. The series is tied, but the boys at Bourda, not fussed, just keep on dancing.

Two full-blooded teams with each other on their minds went hard in the great summer of 2005, and this, the pre-Ashes ODI final at Lord’s, was no exception. Steve Harmison smashed through Australia’s top-order, but Brett Lee, mixing searing yorkers and deathly beamers, turned the fire back on the Poms. It was left to Geraint Jones, with a brilliant 71, and then Ashley Giles and last-man Darren Gough to scrap and ferret the remaining runs. With three needed from the final ball, Gilo squeezed two beautifully ugly leg-byes down to fine leg, and the series, fittingly, was squared.

The most recent first-class tie of note featured a canny left-arm twirler by the name of Andy Afford. Unfortunately, he says he doesn’t recall much of it, other than Worcestershire had a young tearaway debutant called Alex Wylie who bowled Bruce French off his body. A 42-year-old Derek Randall struck 98 as Notts set about chasing 296 before Phil Newport nipped in with a six-fer. With one run needed, and our esteemed editor stranded at the other end, Michael Field-Buss was trapped lbw by Stuart Lampitt to leave the scores all-square.

Seven years apart, two titanic tussles in East Sussex. In the first encounter, a 36-year-old Derek Underwood hit what was to prove his only first-class ton to set Sussex 193 to win and in reply the hosts lost four wickets for six runs to leave the match tied. When the sides met at Hove in 1991, Neil Taylor, with a match aggregate of 314 runs, could count himself unfortunate not to finish on the winning side. His unbeaten 203 in the second dig left Sussex needing 437 to win and at 428-6 the hosts looked home and hosed until Antiguan quick Tony Merrick blew away the tail.

Ireland’s famous win over Pakistan sticks in the memory but if they hadn’t taken a point from this nail-biter against Zimbabwe it would have all been in vain. At 92-1 in pursuit of 222, it was Zimbabwe’s to lose but Ireland got a stroke of luck when Brendan Taylor was run out at the nonstriker’s end. The wheels came off as wickets tumbled and it all came down to the final ball, with Zimbabwe needing a single for victory. Stuart Matsikenyeri swung and missed and Ed Rainsford was left stranded as the underdogs claimed the most unlikely of ties.

Last season’s FP T20 final looked done and dusted for Hampshire, with 11 runs required from two overs with seven wickets remaining. But the Hawks seized up and were left needing eight from six. With one needed to tie, Dan Christian, batting with a runner, survived a mighty close lbw appeal but in the confusion left his ground and scampered through for a leg bye. Somerset missed their chance to run out the Australian and when the chaos died down, Hampshire were crowned champions by virtue of losing fewer wickets. 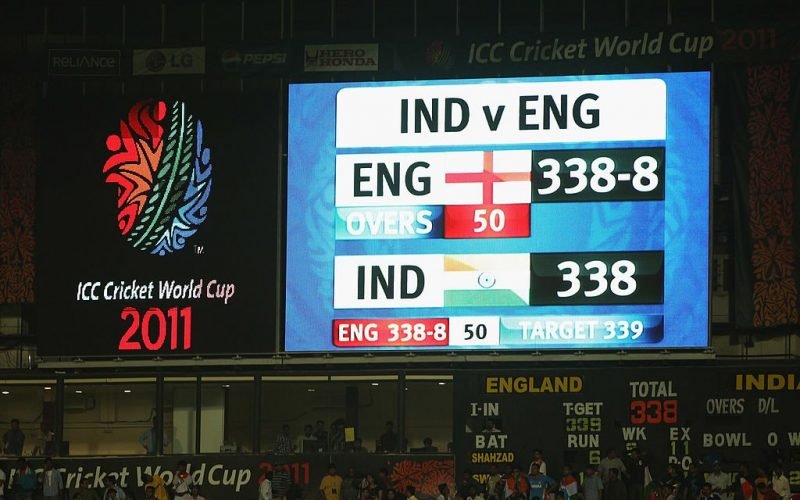 Imperious Sachin kicked things off, but when he went for 120 (stunned silence, heartache, tears etc) England and Tim Bresnan clawed the total down to a not-quite-out-of-sight 338. In reply, Andrew Strauss was possessed. England looked to be cruising, but Zaheer Khan’s hooping seamers and Ian Bell’s leg cramps pegged England back, and when Strauss went for 158 it looked all over. But with 29 needed from two overs England’s tail flails brilliantly. With 11 required from four balls Ajmal Shahzad clubs his first ball for six. Needing two from the final ball, Graeme Swann thinks he’s done it when he finds the middle but the ball is brilliantly stopped at short extra-cover. Tie!

3 | Proteas fall at the last

You know the story. Warne weaves his magic but Lance Klusener swings the match back in South Africa’s favour before Allan Donald is run out to leave the scores tied. Australia advance to the final by virtue of their group-stage record and the Proteas are labelled bottlers. It’s a tag that haunts them to this day.

In smudged, ultra-dramatic black and white, Joe Solomon swoops and cleans out Ian Meckiff’s stumps to complete the run out that ties the Test. The West Indians jump and holler to Solomon’s beat, as at the far end, Australia’s No.11 Lindsay Kline swivels to witness the debris of an incredible last over that has seen three wickets fall to leave the scores, after five days of titanic struggle, rigidly level. Test cricket has its greatest match, its first-ever tie, and its most magical image. 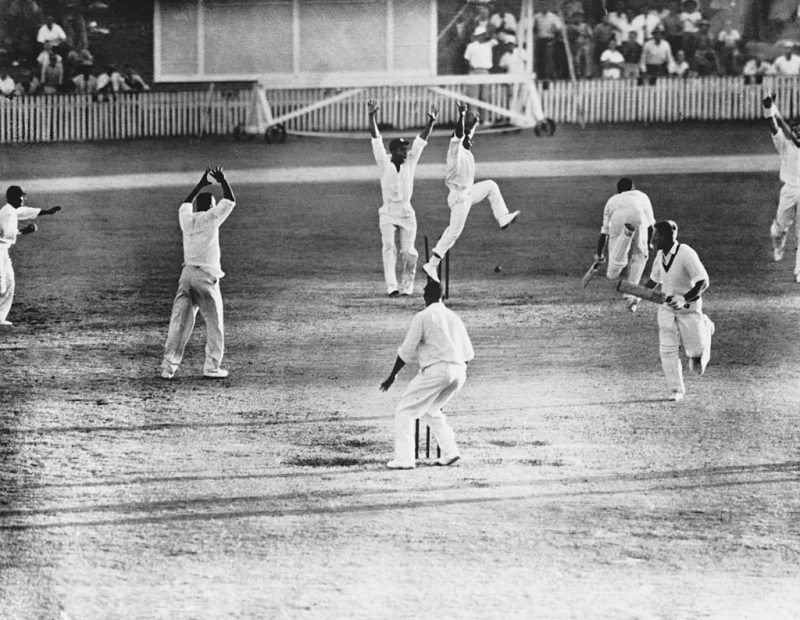 Dean Jones staggers up the pitch. He’s on about 170. Patches of sick pockmark the pitch. His whites are soaked through, his brain loaded with pills. He’s been receiving drinks every 20 minutes but can’t keep anything down. His teammates have been stripping him naked at every interval to wash him down before sending him back out. Jones can barely see.

Dizzy and delirious, he says to his captain Allan Border that he might just have a hit and see what happens. Border spits on the floor. “Weak Victorian,” he says. “Let’s get a real Australian out here.” It’s 40ºC.  Humidity’s at 80 per cent. Jones hacks his way to 210. Back in the dressing room, he has no idea what he’s done. Dangerously dehydrated, Jones is rushed to a hospital and attached to a drip. He has acute exhaustion.

“Even today, it’s Test cricket’s forgotten tie. And it shouldn’t be”

The game goes on. India reply. Kapil Dev clatters a fast hundred to rescue his side. Australia are back in again, eventually declaring to set India 348. Sunil Gavaskar goes off like a firecracker, smashing 90. Others play around him. The final-day crowd grows from 10,000 to 50,000.

Ravi Shastri, the only cucumber in Madras, is up against spinners Greg Matthews and Ray Bright, and standing tall as others wilt. With 13 needed Bright squeezes two quick wickets, bringing the last man Maninder Singh into the fray. Shastri manages to engineer the strike to bring the scores level, but he can’t find that winning run. Maninder has to face. Matthews spins one into his pads, and the umpire’s finger is up before he can finish his appeal.

In the final analysis, it’s a beautiful finish to a brutal battle. Except that “even today,” says Border, “it’s Test cricket’s forgotten tie. And it shouldn’t be.”