Alan Mullally’s bowling boots were shot to pieces after some hard yakka on the 1998/99 Ashes tour, leaving him no choice but to go shopping for a new pair. Eschewing more conventional cricket outlets, England’s left-armer headed to the bright lights of NikeTown, picking himself up a pair of Air Jordan 14 basketball pumps. They looked bloody awful but did the business, as Mullally took out Australia’s top four at Brisbane to finish with ODI-best figures of 4-18 and scoop the Man of the Match award. “The best boots I ever wore in my life,” he later told All Out Cricket.

9. Every dog has its day

What is it about Jack Russells and Test matches at the Wanderers? Almost 20 years to the day since the hirsute Gloucestershire stumper dug himself a hole and spent four hours in it to halt South Africa’s victory charge, another pesky terrier put a spanner in the works as the Proteas prepared for the Johannesburg Test last winter. Quinton de Kock had been taking an afternoon stroll with his two Jack Russells when he slipped and twisted his right knee, forcing South Africa to send for Dane Vilas on the morning of the match. Efforts were made to spare the keeper’s blushes by keeping schtum about the circumstances surrounding his injury but thankfully teammate Dean Elgar decided the story was too good not to share and spilled the beans.

England’s 2013/14 Ashes tour had already reached humiliating levels of rubbishness by the time the series reached Perth but the omnishambles that led to the run out of Shane Watson did at least provide some light relief. Pushing for a declaration, Watto heaves Bresnan high into the sky, Bell steadies himself to take a dolly and promptly drops it. Bresnan, furious, hurls the ball at the stumps and obliterates them, with Watson, who hasn’t bothered running, well short of his ground. Bell walks off distraught at shelling the chance, oblivious to the fact that Watson’s on his way back to the pavilion.

“I’m quite forgetful,” Alex Hales told AOC in January. “I’m the sort of guy who’ll forget to pay a room bill in a hotel, or leave a passport behind. Important stuff.” Two weeks later and Sloppy Al walked out to bat in a T20I at Newlands with the back of his England shirt covered in white tape. It later emerged that he’d been tardy putting his kit in the wash and had been forced to borrow Chris Woakes’ shirt while his dried. Proper village.

6. Laying down the gauntlets

It’s a sorry state of affairs in a club match when a keeper unstraps the pads and trundles in for a bowl, let alone a Test match, and even more so when said stumper is the King of Cool, MS Dhoni. There was something oddly unbecoming about India’s slick skipper reducing himself to a military medium-pacer during the Lord’s Test of 2011 after an injury took Zaheer Khan out of the attack. He did a decent job, though, nearly dismissing Kevin Pietersen only for a caught-behind dismissal to be overturned on review. 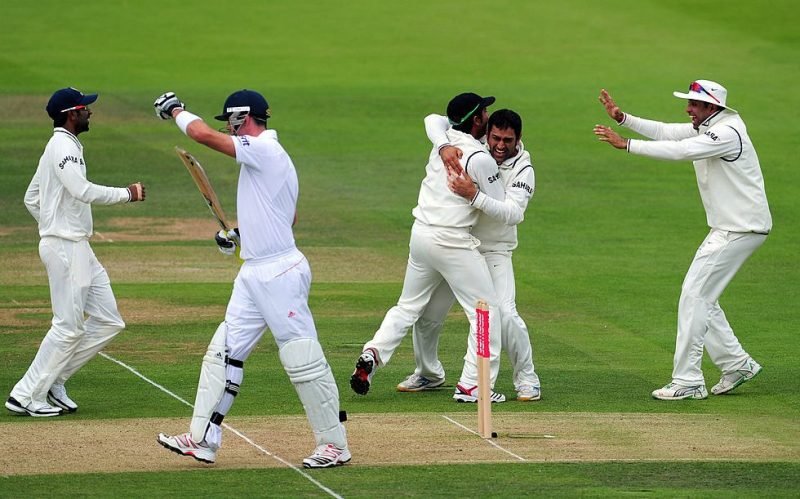 Dhoni and his teammates celebrate after Pietersen is given out caught behind, before the on-field call was overturned moments later

It’s even worse when the person who’s not sure what they’re doing is the wicketkeeper. It’s such a specialist position, but we probably take their skills for granted. When they get injured, a hush descends on the field. What on earth happens now? What follows is a professional sportsman, skilled in the art of catching, putting on gloves and looking like he’s never before had arms, let alone used the hands on the end of those arms to catch. The gloves are all flappy, the pads aren’t right, they’re not even competent at offloading it to first slip. England have previous, the best example being Anthony McGrath filling in for Alec Stewart in 2003 and looking like someone’s grumpy step-brother who’s been persuaded to turn out for the third XI.

As if a Texan fraudster with wandering hands and £5bn worth of ill-gotten gains hosting the England cricket team for a $20m dollar winner-takes-all match wasn’t rank enough, the Stanford Super Series plunged new depths with its truly criminal approach to aesthetics. Stanford’s trademark black bats, which all players were forced to use, made the sorry circus look like a suped-up game of Kwik Cricket.

3. Rub of the Baggy Green

When Mitchell Starc busted his foot during last November’s Adelaide Test against New Zealand, Aussie skipper Steve Smith took the curious decision to send out the team masseur as 12th man rather than calling for one of the allocated sub-fielders. A former Victoria second XI cricketer and one-time Aussie Rules draftee, Grant Baldwin looked built for the task but after couple of fumbles Smith thought better of it and opted to call up a pro in his place.

England’s tour party were dropping like flies on the 1994/95 Ashes tour, with six replacements called up in all. Things went from bad to worse when team physio Dave Roberts was thrown in as an emergency sub-fielder for a tour match at Bendigo and proceeded to break his finger in the warm-up, leaving England a man down and their medical practitioner on the treatment table.

1. ‘Come quick, Brad can’t get his trousers on’

A talented batsman with a colourful rap sheet, Luke Pomersbach’s career was heading southward after a boozy session with Shaun Marsh led to the pair being banned by Western Australia. At a loose end, he decided to kick back with his girlfriend at a T20I against New Zealand, only to receive an eleventh-hour summons to the Aussie dressing room when Brad Hodge crocked his back putting his trousers on. Batting at six, Pomersbach slammed his second ball over the ropes in a seven-ball cameo worth 15 in what would prove to be his only international appearance.