Patrick Eagar, the greatest photographer cricket has known, hung up his lens in 2017. Ben Gardner attempts to decipher what made his pictures so unique.

Patrick Eagar, the doyen of cricket photography who first started shooting the game in 1957, has retired. He is responsible for the image which opens this feature, of Rod Marsh catching Tony Greig during the first World Cup, along with many of the sport’s iconic pictures.

The photo appears as one of many memorable shots taken by Eagar in that 1975 season, documented in Christian Ryan’s brilliant new book Feeling is the Thing that Happens in 1000th of a Second. “People like the Marsh catch,” says Eagar, an understatement if ever there was one.

Thirty-six shots. That was all that a roll of film could hold when Eagar started out. You could change rolls, but then you risked missing something. And cost would soon add up. 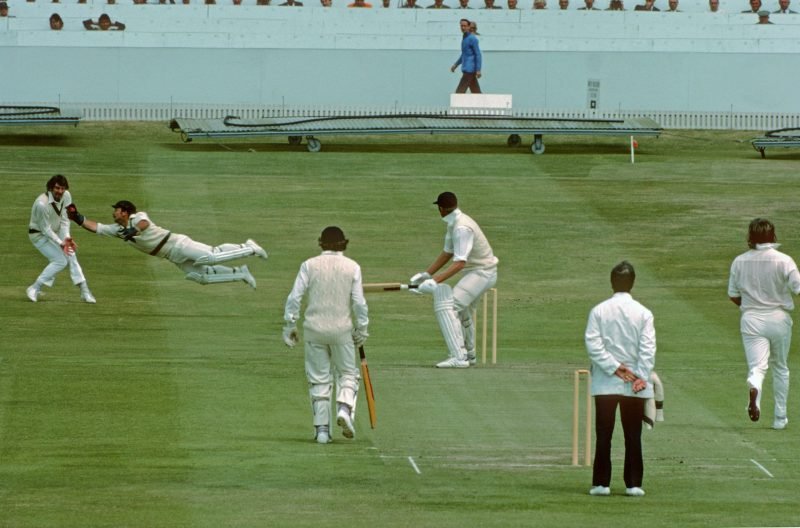 Considering, if you were Eagar, you would also have a roll in a remote camera, you had maybe 72 photos to play with, to get everything from a day’s play.

Consider also that if you get the full 90 overs in, there are 540 balls, and then there are crowd shots to take into account, batsmen walking in and out, and anything else out of the ordinary that might happen, and if you missed something, then, as a freelancer, you risked losing out to someone else who did capture the shot for the next-day editions.

On June 24, 1989, as Steve Waugh was compiling a monumental 152* at Lord’s, Eagar took a stunning photograph of the Australian playing a forward block – an image that sums up Waugh, because of his technical excellence and his bloody-mindedness; and Test cricket, because of its emphasis on survival. It’s the kind of image you would only capture if you were a lover of the game. 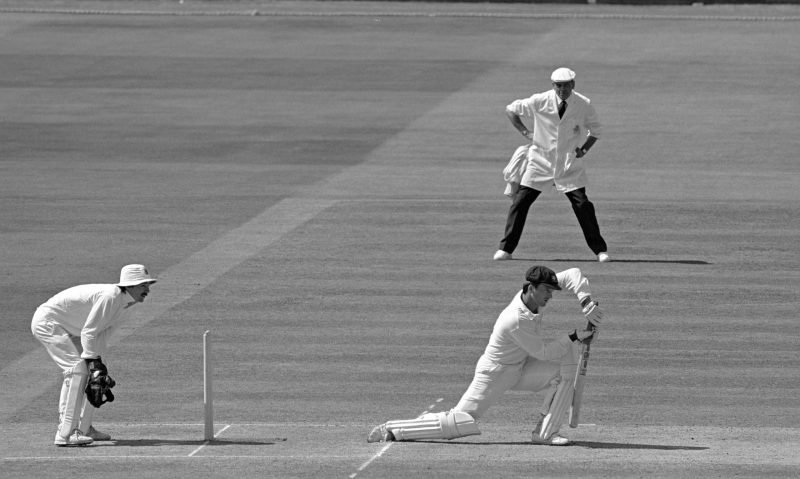 “He’d look for things like that,” says Tom Shaw, a photographer for Getty and a friend and colleague of Eagar’s. “Ordinarily if you saw it [the Waugh shot] and you didn’t know anything about cricket, you would go, ‘Oh, that’s a bit boring’. But if you know cricket, there’s something about that forward defensive. He’s so far forward and so far over the ball. His knowledge of the game makes you feel that’s actually quite an important picture.”

Eagar was immersed in the game from a young age – his father Desmond was Hampshire captain for a time – and he has an eye not just for what will make a great picture, but what will make a great cricket picture. In particular, he knows that while what goes on between batsman and bowler is important, it’s the things that happen on the fringes – the movements of the fielders, the stillness of the umpire – that can really make a photo.

“He isn’t a massive news photographer,” says another freelancer and friend Philip Brown. “He’s not really a big-and-bold, ‘fill the frame with the one player’ type person. He’s got his own style.”

“I think of Eagar as a photographer who spent time at the cricket, rather than a cricket photographer”

It’s a sentiment shared by many, photographers and players alike. Former England captain Michael Atherton wrote in the Times: “I think of Eagar as a photographer who spent time at the cricket, rather than a cricket photographer, such was his skill and eye for the moment and its context.”

Eagar’s love of the game shines through in conversation, whether it’s talking about the best he’s photographed – “Garry Sobers was the best, both as a player and as a subject. He was just fluid” – or taking pleasure in the increased cache of women’s cricket. “I wish I was starting again,” he says.

“The most important thing to him was always the quality of the pictures,” Shaw says. “It wasn’t about the rush or speed to get pictures out – make sure you get the right pictures first, and the best quality.”

Photography is an art form. But it is also a science, and in this aspect Eagar excels too.

“I was always a bit of a technical nerd,” he says. “No one has ever said to Cartier-Bresson: ‘How long did you develop your film for?’ But I would!” Development is one of Eagar’s specialist subjects, and the cause of much consternation when others did it wrong. “One of the biggest things when developing a film is the temperature, it’s like cooking. On a hot summer’s day the temperature of the chemicals would be one thing, and on a cold winter’s evening they’d be another, but they’d always give them the same time, which just doesn’t work. One time I sent the film back to the Independent saying, ‘For Christ’s sake, if it’s hot in there don’t give them so long!’ And I put a little graph in…” 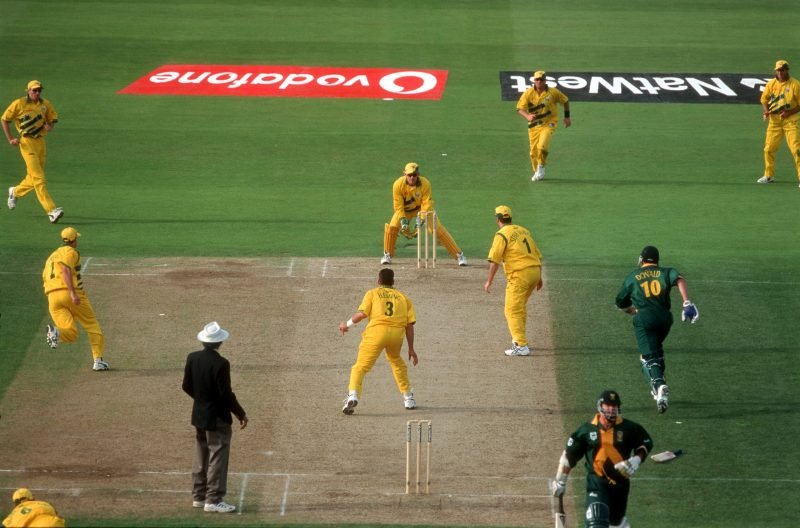 Eagar was too dedicated to his craft to ever cut corners, both in cost and time. It took him longer than all others to switch to digital photography, because it couldn’t match the quality.

“He shot colour transparency from the Seventies through to about 2001, which was far more expensive than negative film,” says Brown. “But he ended up with this amazing archive from that era. Here we are 45 years later and his pictures are the best quality cricket images in the world.”

A third component goes into making Eagar the greatest there’s been – his personality. “He is a lovely, gentle man,” says Brown. “And it’s been a pleasure for a lot of my working life to sit alongside him.”

A slowness to anger is vital in a line of work where so much can go wrong, and good relationships are key. “People would say, ‘Oh, I need a picture of Ian Botham for the cover of a book’. And a cover means space above to fit in some text,” says Eagar. “So you’d think, ‘Oh, I haven’t got that’, and you’d go up to Beefy and say ‘I need a picture’, and he’d say, ‘Can we do it tomorrow…?’ Or he’d say ‘OK!’ or he’d say ‘Eff off !’ It was up to you and your relationship with the players.”

There are many lines to be drawn between photographing cricket and playing it. Both require patience, concentration, the ability to be switched on for every ball. Both require an ability to compartmentalise, to deal with the inevitable imperfections that each entails.

“I know they are there,” says Eagar. “But I’m quite good at that, at thinking, ‘If you’ve missed it, you’ve missed it. Forget it’.” He is answering the question of what photo he is most disappointed to have missed, but he could just as easily be a batsman refocusing after a play and miss. 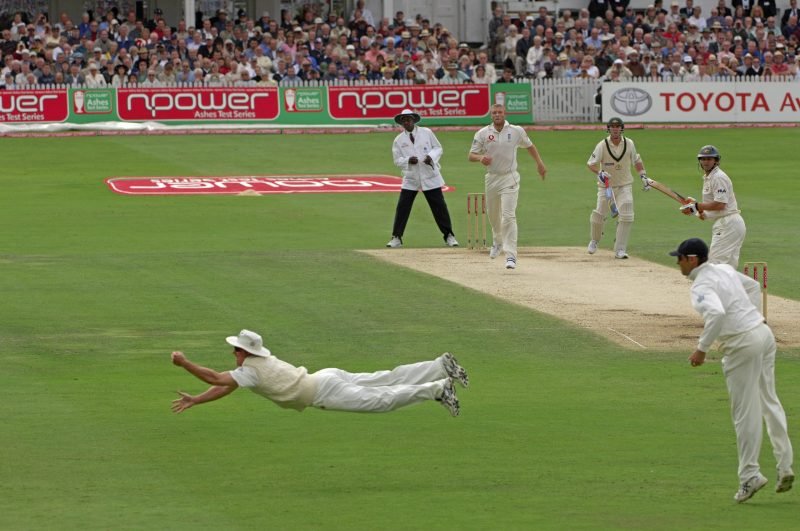 Still, it is impossible not to wonder what might have been, and though he is able to be philosophical about his decision to retire – “You’ve got to stop somewhere!” – there is one who he wishes he could have photographed properly, and perhaps the player in which we find Eagar’s closest analogue: Joe Root.

“Joe has that style of play like him,” says Tom Shaw. “Very smooth and clean, liquid. It wouldn’t surprise me if one day he just turned up, ‘Oh, I just fancied taking some pictures of him’.”

“I suspect he’s better than any English batsman I’ve ever photographed,” says Eagar. “I’d love to photograph him.” We should be so lucky.