As Kerry Packer stuck one in the eye of the establishment and civil war raged in Australian cricket, Ashley Gray was ducking cans of beer at the SCG and plotting his own Test career.

The charge of the Hill Brigade was on, though their preferred weapon of attack was not musket riffles but unopened cans of beer. Full-strength lager launched by burly men in singlets and terry towelling bucket hats intent on teaching the ancient SCG scoreboard and its tardy attendants a prompt lesson in mathematics.

Their war crime: an inability to keep up with the streaky four-hitting ability of Gary Cosier, Australia’s ginger-haired No. 6, who’d had the temerity to edge and square-cut a rampant Imran Khan for four successive boundaries.

As hundreds of a luminium missiles whizzed past cowering spectators towards the hand-cranked scoreboard and its attractive bat and ball weather vane, I comforted myself in the knowledge my grandfather had chosen a safe viewing position for us on the wooden benches in front of the old Bob Stand, a good 20 metres from the infamous Hill.

In hindsight, the chaos of that opening day of the third Test against Pakistan – so routine it wasn’t even reported in the Sydney Morning Herald the next day – was almost a portent for the unruly battles that would follow, just months later, for the soul of international cricket.

Watching an entire Test match live is something of a rite of passage for Australian ‘country’ boys. We’d caught the train down from Newcastle (100 miles north of Sydney) – the hometown of the uber-talented Gary Gilmour and the uber-inconsistent Bob Holland – and booked in to the People’s Palace, a cheap and cheerful Salvation Army hostel for working people.

The preceding Christmas I had made the leap from a willow with a ‘terry-armoured’ coating, which looked like the manufacturer had dipped it in Tippex, to an oil bat, a Gray-Nicolls Record, size 6. ‘Signed’ by Doug Walters – I’d have preferred Greg Chappell, but snow-blind Saint Nick obviously didn’t understand the pecking order of Australian batsmen among young boys – it had signalled my intention, as a 10-year-old, to get serious about making the Test team. Throughout that summer, the grand old Aussie institution of backyard cricket played host to my shiny new Gray-Nic. Its initiation into this hallowed form of the game, however, was disastrous: a lusty, bedroom window-shattering square-drive, which gave me a lifelong fear of lofting the ball, even millimetres off the ground.

Attending the Test match was recognition I’d come of age as a fully-fledged cricket head. I now had a bat that commanded respect, plus I had a soft spot for serial under-performer Kerry O’Keefe – a sure sign I wasn’t a bandwagon fan. It was also a lesson in the perils of hero worship.

In the two previous summers Dennis Lillee and Jeff Thomson had pulverised both England and the West Indies, putting the baggy green on top of the cricket ladder – not that many players from that era of Australian cricket chose to wear one. But cracks had begun to appear. Ian Chappell retired, then Thomson dislocated his shoulder in the first Test, significantly lowering the speed limit of the Aussie pace battery. A sense of stuttering indecision was most apparent to me in the second innings of that match when keeper Rod Marsh, normally as bold and belligerent as his porn star moustache, blocked out the last few overs of the game instead of pushing for victory. Australia fell 23 runs short with four wickets in tact. 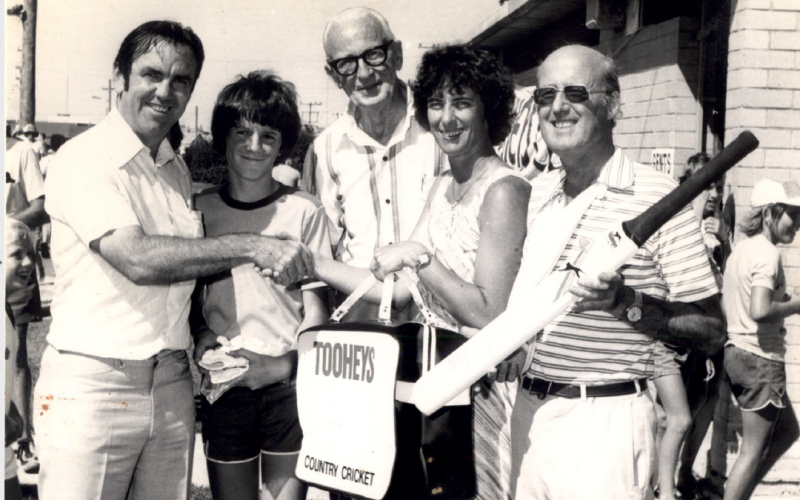 After the macho, blood-on-the-pitch heroics of 1974/75 and 75/76 the drawn result felt a tad wimpy, almost unAustralian. Was Bacchus missing his good mate Chappelli at first slip, commentators speculated? Brother Greg was an astute leader, they said, but no man’s man in the same way his elder sibling was.

So it wasn’t entirely shocking to see a 23-year-old Imran Khan bag 12-165 in that third Test as Australia slunk to an eight-wicket loss, reducing the likes of Rick McCosker and Gary Gilmour to single figures on a benign track. But to a boy only just into double figures himself, it was Lillee’s lion-hearted effort on the final day, when all was lost, that struck a lasting chord. Tasked with picking off 32 to win, Pakistan’s openers Majid Khan and Sadiq Mohammad must have thought their first win on Australian soil a mere formality, but the West Aussie enforcer had other ideas. Shirt unbuttoned almost to the navel, his blistering four-over spell was a masterclass in pace bowling, yielding the scalps of Sadiq and Zaheer and scaring several kilos of bejesus out of the portly Mushtaq.

The takeout was crystal: sure, my heroes were completely towelled, but they never gave up.

For Australian cricket fans, the summer of 1977 never really ended. The Pakistani tour was followed by a two-Test visit to New Zealand and the Centenary Test in Melbourne. Save for my torrid backyard contests, this was probably the most serious sporting event in Australia’s cricket history up to that point; so serious we were even allowed to listen to the commentary on transistor radios in class. A heartstopping 45-run victory neatly set Greg Chappell’s men up for the tour of England, which started only a month later.

Set to the inglorious backdrop of Kerry Packer and the ICC’s fight for the control of the game, the four-month-long Ashes tour was a shambles from an Aussie viewpoint. The ABC television broadcast, which was a direct lift from the BBC, began at 8pm. Jim Laker’s lugubrious tones – matched by the equally lugubrious bowling of Mike Hendrick, whose stock and strike ball were exactly the same: a niggling/boring short-of-a-length delivery – kept me going till the strictly enforced bedtime of 9:30pm.

In his diary of the tour, The Ashes ’77, Greg Chappell wrote that experience was the difference between the two sides – and he was probably right, but there were also some baffling umpiring decisions to contend with. I can still picture Tony Greig at his smirking best edging a searing Thomson thunderbolt off the shoulder of his bat to Marsh in the second Test at Old Trafford. Then umpire Spencer giving it not out despite the fact the ball had deviated the width of a small-size cargo ship. Maybe it was because he was unsighted: Greig had quickly pivoted towards gully in an attempt to conceal his misdemeanour. The sense of injustice still rankles.

Cricket’s civil war was on in earnest when the 1977/78 summer began just a month after the England campaign ended. On one side was the establishment, led by the sideburned Bobby Simpson, a 41-year-old throwback to the conformity of the 1950s; on the other was World Series Cricket skipper Ian Chappell, all permed hair and bristling tache, Marc Bolan to Simpson’s Perry Como. Where did my loyalties lie? For a young boy, it was cricket in excelsis: there were now two teams to pledge allegiance to: one stacked with eager to-prove-themselves no-names, the other with my lofty heroes.

Of course, my grandfather – and a majority of Australians – didn’t necessarily see it that way. The ACB welcomed Bishan Bedi’s Indians and our eagerly anticipated SCG Test tradition continued as if the “Packer circus” had never happened. But St Nicholas had obviously felt the winds of change. That Christmas I received a WSC Cricketeers membership pack, consisting of an avocado green supporters cap, a board game, tickets to Country Cup matches (played by the ‘Cavaliers’, the team reserved for outcasts from the Australian, West Indian and World XIs) a page of facsimiled autographs, and most importantly a flexi disc of C’mon Aussie C’mon, the new TV anthem. Packer was already winning the marketing war.

I also discovered my Gray-Nicolls Record was out of date. The old-school maroon, black and white label had given way to a funky, more Seventies-friendly, red and light pink number. This never-ending summer had claimed another unsuspecting victim.