Back in 2016, Martin Bicknell opened up on cleaning up with Surrey and a peculiar England career during a conversation with Jo Harman.

I was 16 at the time. I bowled a lot of overs and took seven wickets in the match. Daryll Cullinan was in the opposition bizarrely enough. I’d had my heart set on a career in cricket for a long time and I’d played a few second XI games that season and always bowled quite nicely. I was never an out-and-out quick bowler, I relied on skill and being able to swing the ball. I always felt like I could compete at that level.

My first-class debut. I’d taken five wickets for the second team in the game before against Glamorgan and the first team were struggling so there was a hint that I was going to get a chance. It was a huge step up, I was really nervous, but I bowled well and settled quickly. I had a really good year and played most of the games.

In the winter of 1988, I worked incredibly hard on my fitness and then ‘89 was a real breakthrough season for me. We didn’t have an overseas bowler so I ended up opening the bowling with Tony Murphy and I was named joint bowler of the year. I got a place on the England A tour that winter to Zimbabwe and came back with a good report. But I didn’t think I was a complete bowler by any stretch.

This was the year they reduced the seam on the ball and the batsmen cashed in. After two games of that season I had one wicket for 305 runs! From thinking I was close to playing at Test level, it suddenly seemed a world away. The defining moment came when we signed Waqar Younis. He was the master of reverse-swing so we used that method a lot on flat wickets and I rode off the back of that and wickets came a bit easier. I learnt quite a lot from Waqar about the way to look after the ball and make sure that by overs 50 and 60 it was starting to reverse-swing.

I went on the 1990/91 Ashes tour but probably wasn’t quite ready for it. Going to Australia with Kookaburra balls, the ball didn’t swing so much and I struggled a little bit and my confidence got knocked. I played a few of the one-dayers and did alright but I didn’t play any Test matches. I didn’t feel totally ready for Test cricket. With a ball that swung I was always good value for wickets, but if the ball didn’t swing in foreign conditions I didn’t feel like I had enough skills to compete. That Test series came a bit early for me.

They had two immovable objects in Steve Waugh and Allan Border

I’d taken 63 wickets in 10 Championship games for Surrey and I was ready. I felt that playing at Headingley was going to be a good place to make my debut – unbeknown to me it would be the flattest wicket ever! The ball didn’t swing. They got 650-4 and declared at lunch on the third day. I bowled 50 overs and actually thought I bowled really well even though I only got one wicket: Mark Taylor lbw on my 17th ball. But they had two immovable objects in Steve Waugh and Allan Border. Then we went to Edgbaston and again I bowled really well, taking 3-99, and I felt like I belonged. Unfortunately I got injured before the Oval Test and then missed out on the winter tour, which came as a bit of a shock to me. The next couple of years were shocking for me injury-wise.

I don’t think I took a five-wicket haul that year because I never came back and cleaned up – Saqlain and Salisbury bowled at the death. I couldn’t have done any more that year. That was the best period of my career but bizarrely it coincided with me not playing for England. I never got a look in which still rankles a bit. Championship-wise, we were always winning it. I don’t think there were too many occasions when I thought we were under pressure. We were dominant that year.

I got 16 wickets against Leicestershire and that was a big moment in my career. They were our big rivals at the time and we just blew them away. This was the best cricket team I was ever part of. We just smashed everybody and won our second consecutive title. I was at the peak of my ability and my batting was really starting to make a difference as well. The following season I got my first first-class hundred.

I thought I’d passed my peak and at no point did I ever contemplate they might pick me. David Graveney had left a message asking me to call him back and I genuinely thought he was going to ask me about a couple of bowlers they might select. He told me I was in the 13 and that he didn’t think I was going to play but he’d like me to go to Headingley because he was waiting on a couple of injuries. The thought crossed my mind: ‘Do I really want to play for England at this point in my career? If I have a bad game then people will say that’s why I wasn’t picked in the first place.’ But I decided to take it with both hands. And then I got the nod. The pitch was green and damp and I bowled really well but we lost and I thought, ‘That’s it, I’m done’. 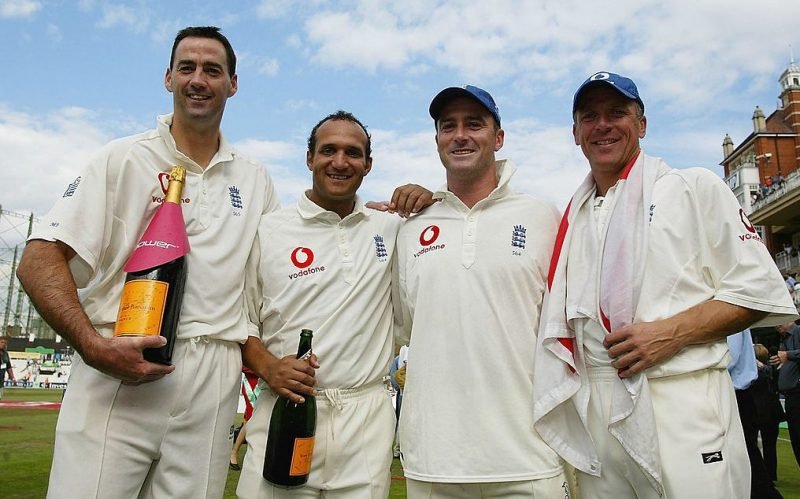 Then they told me they wanted me to play at The Oval! On the first day we didn’t bowl very well as a team, I didn’t think I bowled very well, and they smashed us all over the place. Then on day two, as we were about to go out, Michael Vaughan said: ‘You have the new ball, see what you can do.’ That spell changed the match. I took two wickets quickly then we batted really well and put ourselves in a great position. What happened in that second innings is just the stuff of dreams. We bowled really well, I got four wickets, and we won the match and that genuinely was it. It was a nice way to finish. That memory will be with me for the rest of my life, being part of a Test match win at The Oval.