John Crawley looked back on his playing days in an interview with Phil Walker in 2013.

I remember scoring 169 in this game; I’ve still got the photo in front of the scoreboard. At that stage people said it was amazing, but I thought it was what it was and got on with it. I was very fortunate growing up because I had two older brothers and we came from a sporting family, so I was always pushed along as I was playing with them. My brother Mark was in the same form and year as Michael Atherton at Manchester Grammar, so that always gave me something to aspire to.

This was just before Cambridge’s Varsity match. I remember previously doing well for Cambridge against pretty good attacks, getting consistent runs but never anything very big. Then we went down to Hove to play Sussex and I got 187*, which was an important milestone as it showed I was able to press on and make a big impact on a game, especially against county cricketers.

The great thing about the Old Trafford pitch was that mediocre bowlers would get nothing out of it but there was a lot in it for really good bowlers. They had a pretty much full-strength side, I remember facing Merv Hughes and enjoying the battle, then Shane Warne on the final day when the pitch was turning. I was playing quite well and taking on the short ball, which is something I could have done a little more throughout my Test career. I played and missed a lot to Warne, but also got a few runs from him as well. It was a great game of cricket; they set what looked like a generous declaration but they knew there was enough in the pitch to bowl us out, unless there was something special. I managed to score 100 and we won the game with only a few balls to spare. Afterwards, they shook my hand and said it was a great knock. They were disappointed to lose the game, as they wanted an unbeaten tour, but it was a wonderful game of cricket.

This was my first Test match against Australia. I got 70-odd when we weren’t playing well. I was pretty nervous because I knew they would attack. There was a lot in the pitch, the ball was swinging everywhere and we’d gone down to 20-3 very quickly. I was batting with Mike Atherton, who batted really well, but I got out to the second new ball just before the end of play, which was really disappointing as we’d done so well to build a partnership. That was the first time I realised I could do it at the highest level. To get through that, in front of a hostile crowd, against a rampant team who are on top and the ball’s doing a bit, makes you believe you can do it in a lot of circumstances.

I was facing Wasim Akram, Waqar Younis and Mushtaq Ahmed and achieved my maiden Test hundred. It’s tainted by the fact we lost the game, but it was good to do it against a very fine attack, especially having been in and out of the team a little bit. It was good to get to three figures in a Test arena; I remember being a little twitchy to start with and then going in overnight being somewhere in the nineties and having to wait the next morning whilst it rained! I got out there and clipped one through midwicket to get 100. In the second innings, I remember being pummelled by Wasim, who’d had enough of me, and I was stuck in two minds about whether to take him on or try and survive. In the end I popped one to short leg. I’d had the belief I could do it and then the realisation that it’s tough at the top! 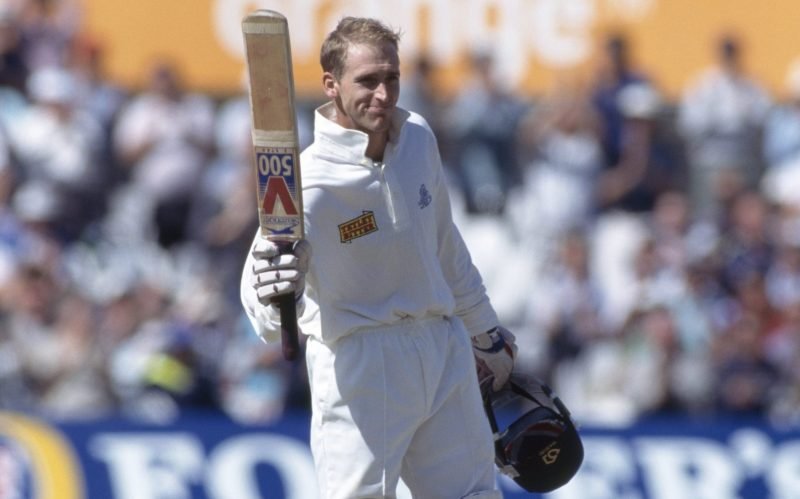 John Crawley celebrates his maiden Test hundred at The Oval

I remember this game vividly, as Mark Ilott’s son is at Oakham, where I teach now, so we talk about it regularly! It was on a Lord’s pitch in September, which did everything; it swung and seamed miles. I got away with a very close – probably out – lbw decision, but I stuck in there, swung at anything wide and ended up getting a half-century. We posted 186 and all I can remember is Essex hollering as they were coming off as they thought they’d done enough to win, so I told the team that we had an as good, if not better, bowling attack than them. In the end, we bowled them out for 57. That sticks in my mind because, once again, it was a challenge. Plus, to help Lancashire win one of those many titles was great. I enjoyed all the Lord’s finals that I played in immensely, as they were great occasions.

Everyone seems to ask about this innings but they forget that, off the first ball I faced against Muralitharan, I just hit it straight back to him and gave him a dolly. Thankfully it was a no ball! Things like that do stick out when you try and coach kids about the game, as it shows it’s a game of fine lines and you need to make the most of your opportunities. I should have been out for 0, but in the end I had a good battle, staying in but also trying to find a way of scoring runs. Once again though it was tainted by the fact they came out and smashed us everywhere, with Sanath Jayasuria hitting a double hundred. Innings are much more special when you win games.

My mother died in July, 2001. I went to the funeral, which was very emotional, and missed a couple of games of cricket. Then, two or three weeks later, I played against Yorkshire in the Roses match at Headingley. Yorkshire were great; despite the rivalry, in my day Lancashire and Yorkshire were always very good mates that socialised well alongside playing hard on the field. I was emotional and they were, too. It was a great game of cricket, I got 70-odd in the first innings and 100 in the second. I remember we lost, because Darren Lehmann smashed about 260, but I thought, “This is what cricket’s all about, it’s a game to be enjoyed.”

I’d had a bit of a falling out with Lancashire and I didn’t practice over the winter. It came to the stage where I realised I might not ever play again if things couldn’t be worked out. I moved to Hampshire and remember having one net before going out to bat for my debut, where I got 272 against Kent at Canterbury. It was a lesson in the fact you can prepare all you want but, actually, when you’re mentally correct and enjoy the game, then that’s the best place to be.

I was recalled to the side after the bad times of dealing with the death of my mother and moving counties. To get straight back into the team and score a hundred at Lord’s in a winning side against a very strong Indian outfit, batting for a very long time with Michael Vaughan – who was playing like a god at that stage – and getting my name on the honours board at Lord’s meant a lot. Getting to a hundred and looking up to the skies, dedicating it to my dead mother meant a lot, too. This moment probably sticks in my mind as much as any. This goes to show that, if you play the game, there are going to be really tough times but you can get success by getting through these challenges and getting back on track.