Acclaimed cricket writer and historian David Frith recalls the Australian summer of 1954/55 and a blow to the head to Frank ‘Typhoon’ Tyson that appeared to change everything.

The Ashes series of 1954/55: it’s strange but I still see it all in colour. Everything was in its favour: a summer when the memories forged were simply never to fade. I was 17, and my native English loyalty was still strong. Len Hutton and his men had won a famous Ashes victory in 1953, and now here they were in Sydney – admittedly minus Fred Trueman, Jim Laker and Tony Lock, but with two brilliant youngsters in Peter May and Colin Cowdrey, and also Denis Compton on board, and the bowling genius Bob Appleyard, and the left-arm spin magician Johnny Wardle. Also on tour was the lovable, bouncy keeper Godfrey Evans, and the glorious fast pair Brian Statham and Frank Tyson, with Alec Bedser unexpectedly and miserably soon to be sidelined after shingles and a bad time in the opening Test at the Gabba.

First sight of them came in the early New South Wales match, from which one spectator remark on the old SCG Hill hung awkwardly in the air. His mate asked who was this Pommie bloke down on the boundary. It was Peter Loader. “He’s a leg-spinner,” murmured that ill-informed gentleman. So much for the supposed wisdom of the Hill regulars.

Billy Watson, a little ginger-haired batsman from my club St George, was called in by New South Wales at the last minute and scored 155 – shedding a quiet tear when he reached three figures. At the end of that summer he won a Test cap. By then, Australia had lost the Ashes (again).

England’s series start could not have been more awful. Len Hutton put Australia in at Brisbane and lost by an innings. This rendered the turnaround in the second Test all the more remarkable.

I don’t even need to look at the scorecard. I’m back at the charming old SCG with ease: the old stands ringing the ground, the grassy slope of the Hill crammed with spectators, many eager to display their wit and their knowledge, opposite the most charming pavilion in the world (mercifully still in place today), my heart pounding. Arthur Morris put England in. Hero Hutton was watchful, until deliberately slashing opposing hero Ray Lindwall over the slips cordon. That untypical Hutton stroke was not preserved on film or photograph but resides clearly in my crowded memory bank. Trevor Bailey hung on for some time without scoring before Lindwall’s inducker plucked out his middle-stump.

But the most dramatic image is of Frank Tyson, batting in a cap, turning away from a Lindwall bouncer, and taking the ball on the back of the head. He went down like a sack of corn and lay still. We thought he was dead. A bunch of British sailors to my left yelled out indignantly. It was an intensely worrying time. Some minutes later Tyson slowly regained his feet and was helped off by the St John Ambulance chaps. Nobody could have foreseen then that ‘Typhoon’ Tyson would blast his way to 10 wickets in this delectable match. 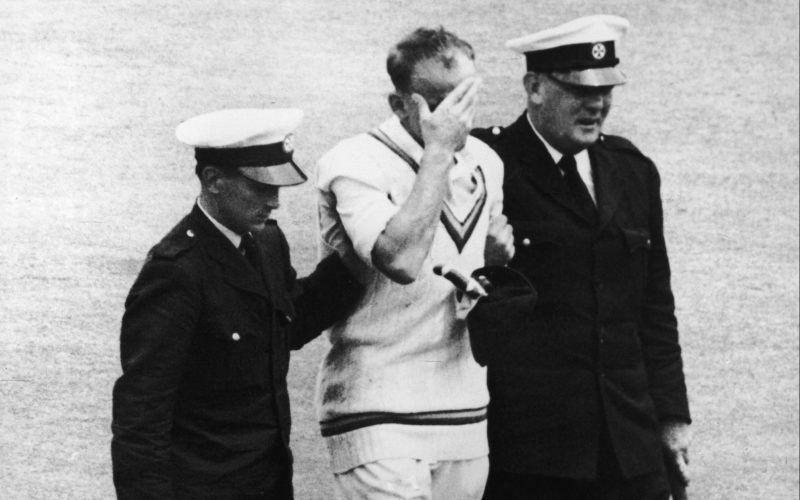 Tellingly, Wardle at No.9 top-scored with a slashing 35, dragging England up to 154 with a last-wicket stand of 43 with Statham, the highest of the innings. Australia (228) then took an ominous 74-run lead and reduced England to 55-3 second time round, before the university boys May (104 in five hours) and Cowdrey (54) rescued the innings. That left Australia seeking 223 to go two up in the series – but only after Statham and this time Appleyard had raised a fateful 46 for England’s 10th wicket.

On the fifth day, Tyson made the headlines: 6-85 to go with his 4-45. There had been visual evidence that some of the Australians were genuinely scared of him. That knock on the head seemed to have changed everything. England by 38 runs, series one-all with three to play.

The Englishmen were back in town seven weeks later, having retained the Ashes with victories at Melbourne (Cowdrey 102, Tyson 7-27) and Adelaide. With television still a few years in the future, it was the radio which sustained us all, together with the newsreel cinemas. I wasn’t able to see any of the second New South Wales match in mid-February, which was a pity because it was drama-packed too: NSW, led by Keith Miller, five down for 26 on the opening day yet going on to beat Hutton’s men by 45 runs, match top-score going to 19-year-old Bob Simpson (98). On the Sunday rest day the Englishmen were said to be coming down to Cronulla for a barbecue laid on by the golf club. They didn’t show up, and momentarily I was bitter. But soon the final Test was scheduled to start. And on three days I took the train into Sydney, walked across Moore Park, and waited with everyone else until play was called off. When it rains in Sydney it really does rain.

That left three days, and what fun they produced. It was the last time I was to see my batting hero, Len Hutton, at the crease. Having made 6 he glanced Lindwall to a tense debutant Peter Burge for a prearranged dismissal. The other opener was none other than Tom Graveney, and he and Peter May put on 182. Tom made his only Ashes century. The decisive over remains vivid in the memory: drinks, and a very flushed Graveney, 86 not out, removed his cap and wiped himself with a towel. Upon resumption Miller’s eight-ball over went for four fours as Graveney drove and swept his way to his hundred. An elderly man alongside me on the splintery benches at the Paddington end kept remarking on Graveney’s resemblance to a previous Gloucestershire and England batsman, Charlie Barnett.

There was a bonus: Denis Compton got going at last, having tossed his cap to the square-leg umpire. The sweep and the drive got him to 84. Trevor Bailey made 72 before making a rather obvious but generous gift of his wicket to Lindwall, who, with 99 wickets, was not expected to play against England again. (He was still around four years later, and inflicted a ‘pair’ on Bailey at Melbourne.)

Australia just failed to avoid the follow-on, Johnson and Lindwall getting into a hilarious mix-up with one run needed to avoid it, and Hutton sent them in again with only just under two hours of the match left (no minimum number of overs in those days). England still got through nearly 30 eight-ball overs in that time, and there was some fun and games along the way. Graveney took his only Test wicket (the stubborn Colin McDonald). Tyson, coming in off a run-up of only a few paces, knocked the bat from Keith Miller’s hands. And Wardle continued to muddle the Aussies with his left-arm wrist spin, to a chorus of “Coom on ye broad acres!” from the English sailors.

Nothing was more emotional than the final over. Captain Hutton himself walked slowly across the field of play, removed his cap, set his field, and bowled to Richie Benaud. They were not all that well disposed to each other. The English veteran had teased him often as he struggled through his early Ashes Tests. Benaud now decided to have the last word. He would plant the Yorkshireman’s rolled leg-break onto the pavilion clock. He heaved. He missed. Benaud b Hutton 22. Series ended. Australia 1, England 3.

I wasn’t going to run off home. I hung around, catching sight of Tyson and Graveney draped in towels in the visitors’ dressing-room, standing close to John Arlott (with whom I would one day have a deep friendship) as he irritably told a boy that he was not Denis Compton, and later positioning myself exactly 22 yards away as Frank ‘Typhoon’ Tyson strolled down the pathway to the rear of the pavilion.

I was inconsolable, for the tour was over and my heroes would soon be flying away. I would not have felt so flat had I somehow have known that some time in the future I’d be well acquainted with almost every one of the players – on both sides.

And, to this day, visions from that ‘54-55 golden summer can be called up in my mind’s eye at any time: and all in full colour.