Peroxide hair, cowboy boots and a pin-the-tail-on-the-donkey approach to team selection: it can only be the Eighties. John Stern takes us back to the summer of 1985, as a rum bunch of Aussies came unstuck against David Gower at his exquisite best.

“And that’s another hundred for the England captain, David Gower.” The monotone of the BBC’s Bob Willis was entirely out of keeping with the mood of the moment.

In the late-summer sunshine, The Oval stood to applaud Gower’s third hundred in the space of four Tests in an Ashes series that had long since run away from Australia even though the scoreline was 1-1 after four of the six Tests.

Willis’ downbeat note at this time of national euphoria still staggers, and tickles, me. He was new to the commentary box, having retired only the previous summer, and his Brooding Bob persona that we have come to know and, er, love was still a work in progress and sounded very much like Bored Bob. Not that the two are necessarily mutually exclusive. Bear in mind, too, that Willis was learning his craft from a legend of lugubriousness, Jim Laker. This was the man who celebrated taking his unique 19-fer at Old Trafford in 1956 by taking his sweater from the umpire and unobtrusively tossing it over his shoulder.

Even if it didn’t stir Big Bob’s emotions, this was a high watermark for Gower. He hadn’t scored an international hundred for over a year until the one-dayers against Australia in early June. And he’d been reappointed as captain only for the one-day series and the first two Tests of the Ashes despite leading England to a come-from-behind victory in India the winter just gone. This was England and this was the Eighties.

Australia weren’t in great shape despite holding the Ashes. Much had changed since the previous series down under in 1982/83. They had lost the holy trinity of Greg Chappell, Rod Marsh and Dennis Lillee who all announced their retirements during the same Sydney Test against Pakistan in January 1984.

Depleted and disrupted further by defections to a rebel tour in South Africa, the ’85 Aussies were a rum bunch. There were the nuggety scrappers like the captain Allan Border and Graham Yallop; the pacy starlet Craig McDermott; a youthful but still pugnacious and hairy David Boon; a washed-up Jeff Thomson whose mullet was drinking from the same bottle of peroxide as Ian Botham’s; and then there was Murray Bennett, the left-arm spinner who bowled in aviator shades. It was not a look calculated to strike fear in the opposition and, sure enough, it didn’t. 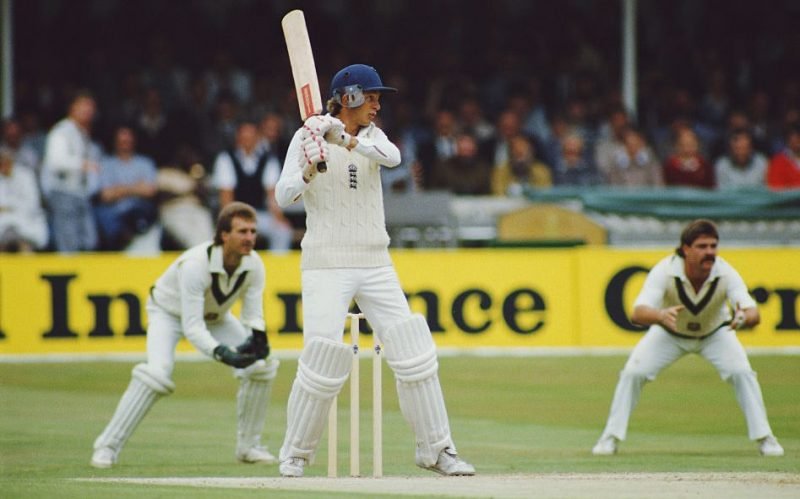 Gower scored 732 runs at 81.33 in the series, including three centuries

England welcomed back Graham Gooch from rebel tour exile and Botham, who had missed the tour of India in favour of his first charity walk from John O’Groats to Land’s End. He had entered the Hollywood phase of his career: bleached leonine mullet, rasta sweatbands and pony-tailed fantasist-manager ‘Lord’ Tim Hudson.

Botham’s impact on the series was more through force of personality than cricketing skill. Charging in off a long run, he bullied the Aussies out. He took 31 wickets and the sight of opener Andrew Hilditch’s Pavlovian addiction to falling for Botham’s leg trap is one of the indelible images of the series.

Gooch was overshadowed by his opening partner Tim Robinson for most of the series until his sun-drenched stand of 351 with Gower at The Oval. By this stage England were flaying a meek and moderate Australian attack to all parts. Their average run rate for the series was above three an over, which might sound a bit pedestrian by today’s standards but, according to Wisden, had “no remote precedent” in Ashes history.

“Hello massive,” someone would say about a similar shot on the same ground 20 years later

The fifth Test at Edgbaston was the one that best summed up this mixed bag of a series. It was the match that tipped the balance finally and decisively in England’s favour. Gower made 215, the highest score of his career, on the ground where, six years earlier, he had made his first double century. There were records, rain and controversy. And there was a joyous Botham cameo which involved him hitting the first and third balls he received from McDermott back over the bowler’s head into the pavilion. “Hello massive,” someone would say about a similar shot on the same ground 20 years later. After he’d made 18 off seven balls he holed out to Thomson on the mid-wicket boundary who turned to the crowd and gave what Matthew Engel described in his book Ashes ’85 as “a little gesture of the sort to which Botham himself has on occasion been prone when things were going badly for him”.

I was on a family holiday in Yorkshire while the Edgbaston Test was ongoing. The prospect of trips out was met with icy indifference by this 15-year-old. Richard Ellison was coming on to bowl. The mop-haired Ellison, of Kent, was one of 17 players England used during the series. While hardly matching their endlessly revolving door (29) of four years later, it’s still a sizeable roster for a side who ran out such convincing winners. Of the bowlers in the first Test at Headingley, only Botham and Emburey were still in the side by the sixth installment at The Oval. Over the course of six Tests they fielded a collection of quiz-question anomalies like Ryan Sidebottom’s dad, Arnie, and the Melton Mowbray mailman, Les Taylor, whose caught-and-bowled at The Oval delivered the Ashes back to England.

Ellison’s brief England career was indicative of the era. In and out, injured here and there, but when he got it right, as he did on the fourth evening at Edgbaston, he was lethal. Hooping his outswinger outrageously he took four Australian wickets in 15 balls including, crucially, Border who he bowled through the gate. Australia were 37-5 overnight and facing a certain innings defeat.

But three hours of rain on the final day and a stubborn stand between Greg Ritchie and Wayne Phillips created an uncomfortable, thrilling tension. Phillips’ demise has passed into Ashes folklore. Trying to square-cut Phil Edmonds, he hit the ball into the boot of Allan Lamb who was taking evasive action at silly-point. A surprised Gower caught the ricochet and appealed. Umpire David Shepherd consulted his colleague David Constant at square-leg and gave Phillips out. England won with 11 overs remaining and the Aussies protested bitterly.

He was always a touch player

“I’m sure the West Indies are quaking in their boots,” Gower said on the pavilion balcony after England had completed a 3-1 win in the final Test at The Oval while raising a replica urn to the crowds. They weren’t of course but Gower knew that. He was always a touch player.

Gower was not the only left-hander on my radar that summer. Middlesex’s Wilf Slack became an all-time favourite. He made a double hundred in the tour match against the Aussies at Lord’s and the mental snapshot is of him slashing the seamers to the Mound Stand-Tavern boundary. I too was a left-handed opener, with considerably more limited ambitions, but he was my new hero. This was a status confirmed as he strolled out of the Grace Gates with a sweater casually draped over his shoulders and a smile wider than Mike Gatting’s waistline. 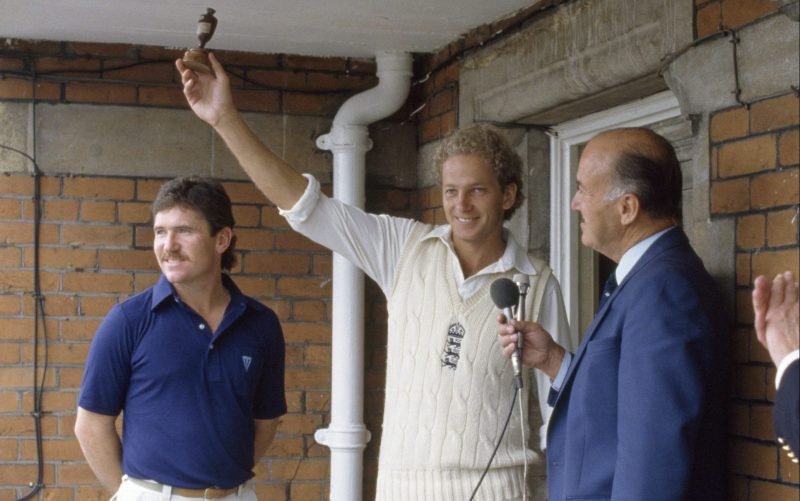 Gower holds up the Ashes urn at The Oval

As Slack chatted with supporters and signed autographs (I was also in the queue), I could see Australian spinner Greg Matthews walking past the back of the pavilion, wearing cowboy boots and swigging from a can of Castlemaine XXXX, the Aussie team sponsors. It was an image that stuck with me, though at the time it was no more than a cute juxtaposition. In hindsight it was perhaps a telling indictment of a slightly shambolic Australian touring party.

Slack was picked to tour the Caribbean with England the following winter which was a mixed blessing such was the ferocious brilliance of the West Indies side and the ensuing 5-0 result. The good fortune of my childhood passion becoming an adulthood profession has led me to meet many of these men who illuminated my formative years. Sadly this was not the case with Slack. He died less than four years later, having collapsed while batting in Banjul, the capital of Gambia. He had suffered four blackouts over the previous two years. He was buried in his England blazer.