It’s been 174 years since the last great showdown between two behemoths of single-wicket cricket. Back in 2016, Jon Hotten took part in a reprisal of a lost format at a venue rich in cricketing heritage.

On June 18, 1846 at Lord’s, Alfred Mynn and Nicholas Felix played the last great game of single-wicket cricket in England. To the modern eye, the statistics of the day make for strange reading; they recreate a barely-imaginable match in an arcane form, played out by two men who have faded back into cricket’s vast and ever-expanding past.

Felix went in first and made nought, breaking his bat trying to get off the mark and then being bowled. Mynn replied with five, caught and bowled from one of Felix’s gentle lobs, a fierce drive that Felix somehow held on to. “I only had time to put up my hand to save my life,” as he said later.

Felix went in again, and remained there for another 247 deliveries, from which he made three runs plus a wide. He was bowled from the 248th ball he faced, and lost by a single run.

The match had lasted for nearly five hours, nine runs were scored and three wickets fell. It is a dispatch from another world, an age in which time and action moved differently. To recapture some of the excitement and pizzazz requires context. Single wicket was the T20 of its day. Its mano a mano nature was easy to understand, it always produced a champion and the cricket offered plenty of opportunity for the spectators to gamble on the action.

They called Alfred Mynn ‘The Lion of Kent’ and he was the king of single wicket. Like other great all-rounders that would follow, he seemed bigger than the game, bigger than life. He was the Ian Botham of the era, the Flintoff of his day, and he was loved just as unconditionally. And if Mynn was Flintoff, then his opponent and friend Nicholas Felix was a different kind of cricketer, like Gower perhaps, a will o’ the wisp left-hander that another of Kent’s ‘famous five’, Fuller Pilch, rated as the most attractive batsman in the land.

Felix was a renaissance man. His real name was Nicholas Wanostrocht, but as the headmaster of a school he had inherited from his father he felt that he would lack sufficient gravitas for fee-paying families if it became known he was a cricketer, so he adopted ‘Felix’ as a pseudonym. He wrote one of the first works about technique and psychology, Felix On The Bat, invented a bowling machine called the Catapulta and made the first pairs of batting gloves by sticking India rubber to the fingers. His watercolours of cricketers and wildlife were widely admired, and Fuller Pilch was often amused by Felix’s ability to coax a tune out of almost any musical instrument.

Mynn had been undefeated at single wicket for more than eight years, since beating James Dearman for £100 and becoming Champion of England. His skills matched perfectly with this odd, small-sided game that began as a way of being able to match two cricketers, or smaller groups of players, against one another in a fair contest. The rules varied, but some general principles held. To register a run, the batsman had to get to the bowler’s end and back again. The areas of the field in which he could score was restricted by a ‘bounds’, usually a line that extended outwards from the popping crease at the batsman’s end. Any hit landing in the bounds – essentially going behind square – could not be scored from. If the combatants were granted fielders, it would be an equal number, often not more than two or three. 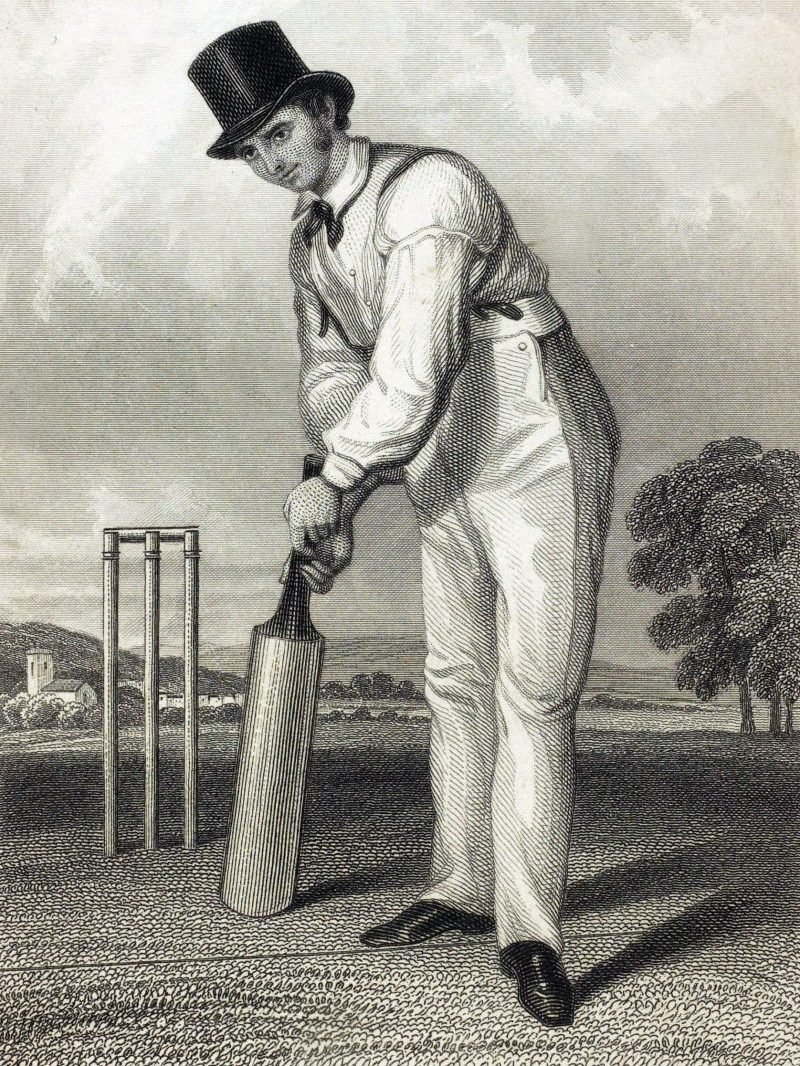 During cricket’s emergence from country pastime to metropolitan entertainment, all kinds of odd matches were staged. A farmer called Francis Trumper used his sheepdog as a fielder and together they beat a Two of Middlesex, mainly because of the dog’s speed across the ground. The writer EV Lucas came up with another shaggy-dog tale, about two 80-year-olds who played single wicket, the bowler giving up in exhaustion after conceding 12 runs and leaving his own wicket to be bowled down. His opponent was so knackered he bowled 13 wides in a row and lost the game.

Mynn versus Felix became the format’s final and defining contest. Mynn held all of the advantages. His size and power made him a fearsome hitter, and he was one of the most devastating fast bowlers in the land. By contrast, Felix bowled underarm dollies. When they duelled at Lord’s, the way that Felix resisted Mynn’s bowling on the notoriously rough wicket enthralled the crowd. Of the 248 deliveries he received in his second innings, he struck 175, many of them into the bounds. When he was at last bowled out, the demand for a rematch was such that it was set immediately, and took place over two days on common ground by the White Hart pub in Bromley. Mynn won once more.

The expansion of the railways ended the first bright burst of single wicket, yet I had often wondered what it would be like to play, and this season I found out. Broadhalfpenny Down, the tiny gem of a ground set deep in Hampshire next to the Bat and Ball pub once run by Richard Nyren, glows with cricket history. It is no longer the home of the Hambledon Club, who are now based just down the hill, but still stages 50 matches per year, mostly for charity, under the friendly stewardship of the Broadhalfpenny Brigands Cricket Club.

When the chance to play on the Down came up, the idea of recreating one of the original forms of the game was irresistible. Ten entrants were drawn into two groups of five. A bounds was set at a slight angle from the popping crease, allowing for a genuine square-cut or sweep, but not an edge or glance. One group of five fielded while the other played round-robin matches of one eight-ball over per innings. Dismissal resulted in the deduction of four runs from the batsman’s total. Two semi-finals and then a final, played out in perfect summer weather just as the sun dipped below the ridge and cast long shadows, produced a fitting champion named Peter Frankopan, like Nicholas Felix a renaissance man – hotelier, writer and academic who claims to have once opened the bowling for Croatia.

It was a long, hard, fun day’s cricket, the right kind. The only runs were singles or boundaries, and every wicket caused the game to swing violently in favour of the bowler. For an afternoon, single wicket had us in its thrall, just as it would have done two centuries ago.