Raf Nicholson takes us back to the 1993 Women’s World Cup, where England’s unexpected victory attracted a new audience to the women’s game.

The summer of 1993 isn’t remembered by many as a highlight for English cricket: losing the Ashes 4-1, with two innings defeats, is never much fun. But for one England team, the summer of 1993 heralded the prospect of a World Cup at home, the first to be staged in this country since the inaugural women’s tournament in 1973.

It was nearly the World Cup that wasn’t: the tournament came within two days of cancellation, before the Foundation for Sport and the Arts agreed to contribute £90,000 towards the costs. This was clearly a tournament run on a shoestring. Teams were put up at Wellington College, and the organisers had to fight for access to decent pitches and facilities: the players had to roll the wicket themselves ahead of England’s group match against Holland at Ealing. The 14 players in the England squad, still amateurs, all took time off work to compete: captain Karen Smithies was working as a manager at Coral Racing and the rest of the squad included a police officer, several teachers, two clerks and a van driver.

For all that, this was a team who, under ex-England international Ruth Prideaux, had trained like professionals, undergoing a regime that was way ahead of its time. Prideaux, on her appointment as coach in 1988, had introduced fitness testing, including the dreaded bleep test, as well as the use of sports psychology – something that not even the England men’s team had yet embraced. It inspired a positive attitude in the players: “We’re going to win it,” Smithies told the media before the tournament began. Not many believed her.

The teams participating were Australia, Denmark, England, Holland, India, Ireland, New Zealand and West Indies. It was structured as a round robin, with the eight teams playing each other once, culminating in the two teams at the top of the table contesting a final at Lord’s. It was reigning champions Australia who began the tournament as hot favourites, having won the three preceding finals.

But it was New Zealand who dominated in the group stage, taking everyone by surprise as they won all their matches, including a 10-wicket thumping of the Aussies. By contrast England, having lost to New Zealand by 25 runs, scraped through off the last ball in their game against India and were left needing to beat their old enemy Australia in order to reach the final. The match, played at Guildford, attracted huge press interest, with more reporters than had ever been seen at a women’s cricket match in England before. Perhaps Australia felt the pressure.

What transpired was a spectacular innings from Carole Hodges, who finished on 105*. Over at Headingley, England’s men were surrendering the urn as they lost the fourth Test by an innings on a day that saw Graham Gooch resign as captain. But one England team, at least, were celebrating. They made 208-5 and Gill Smith then took 5-30, England winning by 43 runs. “This is the way to do it, chaps,” wrote Simon Hughes in The Independent.

Smithies’ employers Coral made New Zealand 7-4 on to win the final, which must have galled England’s captain! All eyes, then, were on England as 4,500 spectators, including then prime minister John Major, turned out at Lord’s to see if they could once more defy the odds. Even the BBC decided, at the last minute, to include live coverage of the final on Grandstand.

England made 195-5 in their 60 overs, including 81 off the last 12, as New Zealand dropped several crucial catches, most notably Jo Chamberlain when she was on 7. She went on to score 38, putting on 57 from 53 balls for the fifth wicket with partner Barbara Daniels (21*), and was greeted by a standing ovation from MCC members as she left the pitch.

Chamberlain then starred in the field, too, having Kirsty Bond caught at gully, and running out the premier Kiwi batsman Debbie Hockley with a direct hit from cover. New Zealand collapsed from 51-1 to 71-5 and there was no way back. Fittingly, it was Jan Brittin, who ended England’s highest international run-scorer of all time, who took the winning catch, as New Zealand were all out for 128.

The spectators flooded the pitch to watch Smithies and her team lift the trophy, hug each other and shed tears of joy. The celebrations would last long into the night. 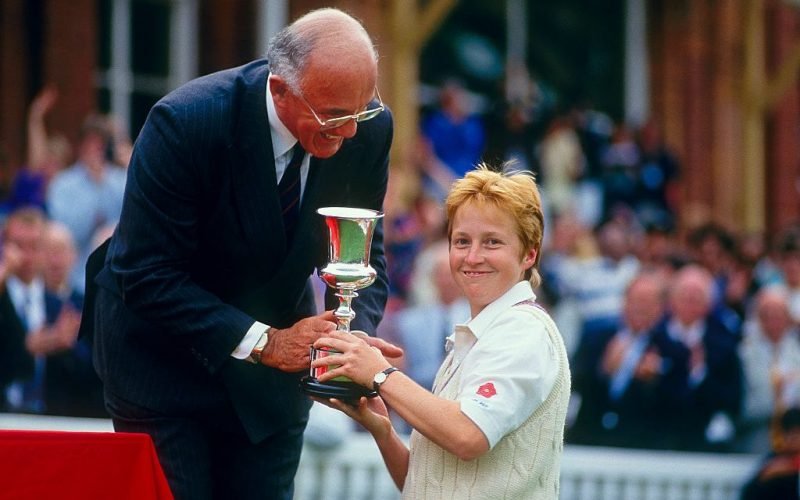 The day after the final saw women’s cricket dominate the front and back pages of all the national newspapers for the first time in the sport’s long history. The legacy of the tournament was to convert many who had previously been sceptical to the delights of the women’s game.

Peter Johnson in the Daily Mail praised “the whooping girls who gave English cricket a rare moment of international glory… the female of the species is deadlier than the male”. John Etheridge declared England “Queens of Lord’s” in the Sun. And Mike Selvey in the Guardian said he had witnessed “high-quality skills with the bat, old-fashioned virtue with the ball, superb fielding… and not a single no-ball to blight the memory”. “Make no mistake,” he concluded, “these are terrific cricketers.”

A few days afterwards, then president of MCC, Dennis Silk, wrote to the chairman of the Women’s Cricket Association: “It was the best day’s cricket at Lord’s this year and between you all, you created a magical atmosphere. You have done the whole of English cricket a great service.”

Carole Cornthwaite, née Hodges, scored 334 runs at 47.71 in the tournament, including two centuries.

“I’d played in two World Cups previously but having the opportunity to play in a World Cup at home was great. It was the culmination of my career because I knew I was going to retire at the end of the season.

“I loved that game at Guildford. It was the only century I scored against Australia. I got going with singles, got myself in, and then I really got going, and towards the end I stopped worrying about getting out and just batted like I would in a club match. The bowlers didn’t know where to put it, because they’d never seen me bat like that! I enjoyed that.

“The final at Lord’s was a great day. It was great to see the papers the next day with the photographs, not just the sports pages but actually on the front page of the newspapers, big colour photographs from our match. Incredible, and great fun.

“Walking down the steps at Lord’s to bat, I was so nervous”

“I remember beating Australia, which was fantastic, because they thought they were going to stuff us! Ruth was a phenomenal coach and the main thing was that the sports psychology sessions instilled a belief within us that this was going to happen. We were going to win.

“Walking down the steps at Lord’s to bat, I was so nervous. They kept putting me down the order because we kept losing wickets and we weren’t scoring very quickly. I ended up batting with Jo Chamberlain. We were both on zero for a while and I thought, ‘I just need to score one, I just need to get off the mark’. And they were showing it live on Grandstand! And I did alright. Then we won. We won! It was just amazing. We were in all the papers and Karen Smithies was on breakfast television! It was a really special time.”