England rock, Warwickshire stalwart and scorer of 102 first-class tons Dennis Amiss looks back on 10 moments that defined his illustrious career.

My memory of my debut is clearish – I wouldn’t say totally clear but I do remember Ken Higgs, who I roomed with, giving me my England sweater and cap and I think I went to bed in them! I was so pleased and nobody was ever going to take them off me again. I was very nervous obviously, my first Test match against a great West Indian side with the likes of Sobers, Kanhai and Gibbs. To play for England is very, very special and I was really nervous when I went out. My feet wouldn’t move around in the crease but I managed to get 17. It was a very good wicket though, and of course I got out only to let Tom Graveney and John Murray score centuries and Higgs and John Snow get fifties apiece.

Open Account Offer. Up to £100 in Bet Credits for new customers at bet365. Min deposit £5. Bet Credits available for use upon settlement of bets to value of qualifying deposit. Min odds, bet and payment method exclusions apply. Returns exclude Bet Credits stake. Time limits and T&Cs apply. The bonus code WISDEN can be used during registration, but does not change the offer amount in any way. Bet on the IPL here. 18+ please gamble responsibly

I think my record against Australia was probably a mental thing. I got off to a bad start in this Test match and unfortunately throughout my whole career against Australia I wasn’t able to shake that off. In 1974/75 I ended up getting another pair as well. I think sometimes in your career you’re around the right place at the right time and other times you’re in the wrong place at the wrong time. So there is a little bit of that but I suppose getting off to a bad start against Australia meant that I was never able to get going against them throughout my career.

This was good. I bowled as well – we were a bowler short and Tom Cartwright was declared unfit for the game so I had to step in. I started well with the ball but wasn’t so good after lunch so then I had to get back some runs with the bat. I wasn’t used to bowling so I lay in the bath for hours to loosen up before it was my turn to bat and it was nice to be able to retrieve some of those runs that I’d given away with the ball! Alan Smith came in and played a gem of an innings and it took us through to win the cup which was very special because we had lost in the final previously.

This was the first ever hundred in an ODI, which was nice. Bob Massey and Dennis Lillee had been bowling very well in the Test matches and I can remember in the first over Massey bowled one or two which bounced and left me and I thought ‘Oh my gosh, if he keeps bowling these we’ll never get a run,’ but fortunately he didn’t bowl too many more and it was just a terrific wicket and I really enjoyed the innings and setting up the win up for us. Limited-overs cricket was licence for us to play shots, we had a little bit more freedom and the wickets tended to be good. I suppose I enjoyed all forms of the game, I just loved playing, I just loved batting.

This was an important innings. We had gone one-nil down in the first match at Trinidad and this helped us avoid going two-nil down in a five-match Test series – not something we wanted to do. We saved the Test, got stronger during the series, won the last one and came away with a drawn series. It was something that hadn’t been done in the West Indies for a number of years so we were really pleased. A number of Warwickshire members had taken the trip out there and it was really pleasing for me to score runs in front of them and save the Test. I wanted to carry my bat but Bob Willis wouldn’t let me because he didn’t want to bowl at the West Indies again so he said he wasn’t going to give his wicket away.

It went nicely for me that day but I did get hit by Sarfraz Nawaz: I was hooking and I played a bit too soon and it hit me on the jaw, knocked me back and I had to retire hurt. I came back and continued, not for too much longer, but I really enjoyed that knock and it was in front of a full house, I think it was on a Saturday. It was just really pleasing to get a hundred against people like Imran Khan – it was a fine attack.

Happy birthday to Dennis Amiss, @englandcricket opener and legend at @WarwickshireCCC. He was a @WisdenAlmanack Cricketer of the Year in 1975 – https://t.co/dSurWiDkbj #wisdencricketeroftheyear

A brilliant memory. This was the first World Cup match and it was a terrific wicket and a great day – there wasn’t a cloud in the sky, there was a full house and everything just seemed to go well. I can remember the first ball, it was just a little bit short outside the off-stump and it was one of those that sometimes you think about having a sighter at and blocking or knocking it for one but it went off the middle for four to set up the whole innings! It was very, very enjoyable – we got a big total and we were able to beat them.

We’d been to India in 1971 with Tony Lewis and we had a pretty bad time against the spinners and they beat us quite convincingly in the Test matches. Those of us who had been in 1971 and went again with Tony Greig in 1976 were determined to try and put things right – and we were able to do that. I think we set up a really big total in the first innings and then John Lever swung the ball quite a bit. It was really pleasing to set the series up and we went on to win the first three of the five, we drew one and lost the other at the back-end of the series.

In 1971 the ball turned square from the word go, there were two overs of seamers with the new ball and then the spinners would be on and we would have four of five fielders round the bat. It was something new to us, but having had that experience it put us in good stead when we went back in 1976.

I never ever thought I would get to 100 first-class hundreds. I was going well on the day but then when I got to 98 or 99 it started to become hard going. I actually talked Lancashire into staying on the pitch, there was nothing in the game and Clive Lloyd agreed to allow me to pass 100. A few years previously I’d been thinking of retiring but David Brown, who was manager of the time, said that I had 86 hundreds and that they wanted me to continue because they felt I could still add value to the side and help the youngsters so I continued until I was 44. It will be difficult for people to get 100 hundreds now because they play fewer games but it was a real honour. 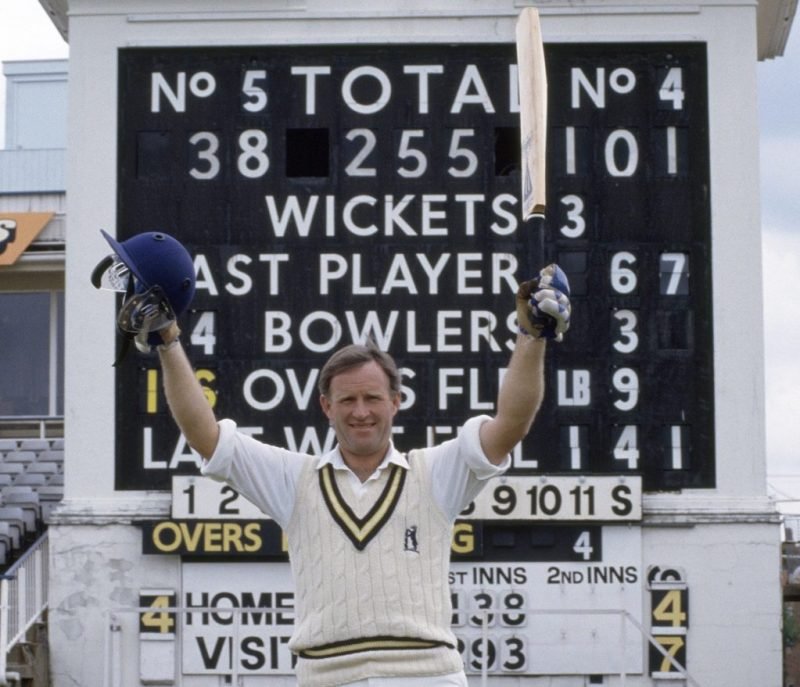 The double hundred against the West Indies was so, so special. People were talking about me not being able to play fast bowling so to come back against four of the best West Indian cricketers of all time, especially Roberts and Holding, was very special indeed. I changed my technique, I’d got this new back-and-across method after suffering at the hands of the Australians in 74/75. I just wanted to find a way that I could play fast bowling, a better way of playing fast bowling, and I practised and practised it. During the season I had scored runs and I scored runs against Sussex at Hove in the quarter-final of the Gillette Cup, against John Snow and Tony Greig and Greigy rang to say that having seen that – what I’d done against John Snow – he wanted me in for that last Test match.