It was a tough old day for England at the Ageas Bowl on Wednesday; West Indies showed plenty of fight to earn a 114-run lead.

With Dom Sibley and Rory Burns negotiating a tricky period at the end of the day, England will begin day four on 15-0 with plenty of work still left to do.

But fear not England fans, over the last decade the hosts have gone on to win on nine occasions after conceding a first-innings deficit. Here’s a reminder of those efforts:

England slumped to a perilous 124-8 in the first dig of the second Test of a four-match series against India in 2011. They eventually recovered to 221-9 before Harbhajan Singh removed Stuart Broad for 64 – a score he has since surpassed only once – to end the England innings. In response, the Indian top order, blessed with Rahul Dravid in obdurate mood, were poised to punish Andrew Strauss’ men as they reached 267 for the loss of just five wickets. However, Broad turned saviour once more, this time with the ball, taking four of the last five wickets, including a hat-trick, as the tourists crumbled to 288 all out – a lead of 67.

In the third innings, a middle order which had misfired on day one roared into life as Ian Bell notched his 15th  Test hundred, Pietersen made 63, with Eoin Morgan and Matt Prior reaching 70 and 73 respectively. Tim Bresnan then put India out of sight with his 90 as the hosts reached 544 to take a lead of 477. Buoyed by the success he enjoyed against India’s bowlers, Bresnan set about dismissing their batsmen; the ex-Yorkshire seamer took 5-48 as MS Dhoni’s side were bowled out for 158. England won by colossal 391 runs.

In the opening Test of the 2013 Ashes, Alastair Cook’s side posted a sub-par 215, with Joe Root, Jonathan Trott and Jonny Bairstow the only players to reach 30. In reply, Australia were teetering at 53-4 before Steve Smith and Phil Hughes coaxed their side towards England’s score with a fifty partnership. However, after removing Smith, Graeme Swann and Jimmy Anderson combined to blow away the Aussies’ tail – well, almost. When debutant Ashton Agar joined Hughes in the middle, the score was 117-9. When Agar departed it was 280-10; he’d made 98 and the Australians’ lead was 65.

In their second attempt, England’s batsmen brushed aside Agar’s heroics and set up an enthralling finish. Bell’s ton was the centrepiece of a total of 375, and he was aided by Broad ‘nicking it to slip’ and not walking. Australia were set 311 to win. Five wickets from Anderson, two apiece for Swann and Broad and one from Root saw Australia fall 14 runs short.

Cook’s team pulled the same trick at Durham later in the same series. Root failed at the top of the order, as did Pietersen, Bell, Bairstow and Prior, exposing an England tail which offered little resistance; the hosts were bundled out for a disappointing 238. In reply, Chris Rogers scored a hundred opening the batting and Shane Watson made a measured 68, but beyond that the tourists failed to capitalise on England’s lacklustre first-innings effort, eventually finishing on 270 with a 32-run lead.

Bell’s 113 formed the bedrock of England’s third-innings effort, with Pietersen and Bresnan making useful contributions as Cook’s side were bowled out for 330, leading by 298. During Australia’s fourth-innings chase, Broad got on a roll, taking 6-50 from 18.3 overs. Michael Clarke’s team reached 109-0 but eventually succumbed to Broad and co. still 74 runs shy of England’s total. 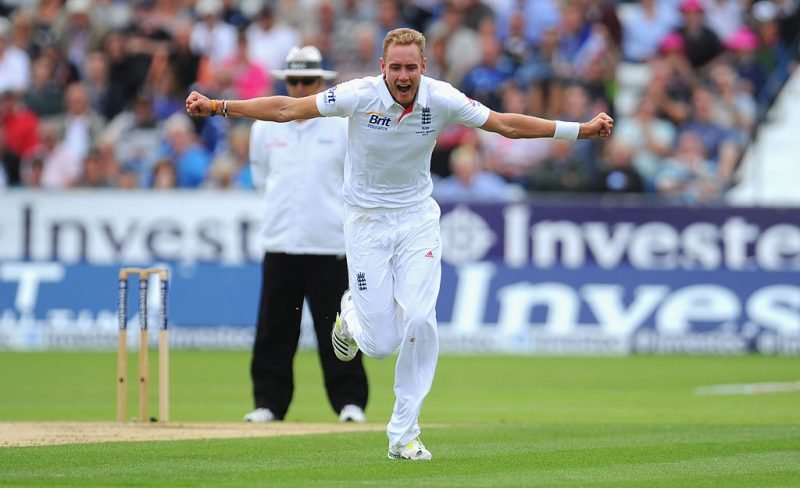 The first Test of New Zealand’s tour of England saw the hosts win despite having trailed by a mammoth 134 going into their second dig. With no-one reaching 20 in the top four, Root led the rearguard magnificently, falling two runs short of a place on the honours board. For most of his innings he was accompanied by Stokes, who bashed 92 from 94 deliveries. Jos Buttler and Moeen Ali then steered England towards a healthy-looking 389.

New Zealand’s response, however, was emphatic. Openers Martin Guptill and Tom Latham put on 148 for the first wicket before Kane Williamson cashed in for a ton, supported by Ross Taylor (62). A total of 523 seemed to have ended any hopes of an England victory.

The fightback was led by the skipper: Cook scored a grinding 162 from 345, but it was Stokes who caught the eye with a sublime 92-ball 101, the fastest-ever Test century at HQ.  New Zealand fell 124 runs short of their target of 345 as Moeen’s running catch at third man off Trent Boult’s bat sparked unbridled joy from the Englishmen.

A knock of 86 from Moeen Ali was the highest score in England second innings, in which numerous contributions helped overturn a first-innings deficit of 103. Prior, the hosts had scraped to 297 before Misbah-ul-Haq’s team responded with 400, led by Azhar Ali’s superb 139.

In Pakistan’s chase of 343, all of England’s frontline bowlers contributed with two wickets each to dismiss the visitors for 201, 141 away from victory.

The fourth Test of India’s 2018 tour of England was a low-scoring affair. Indeed, the highest total of the match was India’s 273, in response to England’s first innings score of 246. Cheteshwar Pujara made 132 not out to give Virat Kohli’s team a slim lead of 27 going into the game’s third innings.

Jos Buttler top-scored for England with 69, supported once more by Sam Curran who made 46. Root and Keaton Jennings also made 48 and 36 respectively, with England finishing on 271. The Anderson-Broad axis got England off to the desired start, taking the wickets of Shikhar Dhawan, KL Rahul and Pujara with only 22 runs on the board. However, as is often the way, Kohli led India’s recovery and, with the help of Ajinkya Rahane, took the total to 123 before Moeen’s removal of Kohli sparked a flurry of wickets and extinguished India’s hopes of getting back into the five-match series.

A swift 124 from Root, buttressed by Ben Foakes’ 65 not out and Rory Burns’ 59, saw England claw back a 46-run deficit and set Sri Lanka a target of 301. This impressive batting effort followed a first-innings total of 290 which was attained primarily through enterprising half-centuries from Buttler and Curran.

Sri Lanka put up 336 in their first innings thanks to half-centuries from Dimuth Karunaratne, Roshen Dhananjaya de Silva but in the chase, they faced the wrath of England’s finger spinners as Jack Leach collected five scalps and Moeen chipped in with four. Sri Lanka perished for 243 as England won by 57 runs.

Tim Murtagh and Mark Adair wreaked havoc in a frankly bizarre one-off Test at Lords, as England were bowled out for 85 in their first innings. Murtagh’s medium-paced wobblers removed five England batsmen for the loss of 13 runs; Adair, slightly quicker, took 3-32. In response, Ireland managed 207 with Andy Balbirnie top-scoring with 55.

Trailing by 122, nightwatchman Jack Leach made an unlikely 92 at the top of the order, helpfully supported by the fast hands of Jason Roy. England set a target of 182, with a shock Irish triumph not out of the question. However, 15.4 overs later the game was over, Ireland skittled for 38. Woakes took six, Broad four and England victory.

England, 2-1 down in the series, faced almost certain defeat, having been rolled for 67 in reply to Australia’s 179. Joe Denly top-scored for Root’s side with 12 as Josh Hazelwood took five wickets and Pat Cummins three; the innings was over inside 28 overs.

Looking to stretch their lead and diminish what dim England hopes persisted, Australia got off to poor start as David Warner fell to Broad (again) for a duck, but Marnus Labuschagne made an impressive 80 as England were set a  target of 359 to keep the Ashes alive.

Both openers departed cheaply but Root and Denly both passed 50 to retain some semblance of hope amongst the Leeds crowd. When Denly went, England’s World Cup hero Stokes came to the crease. The knock that followed would surpass the heroism of July 14. Batting with the tail, the game and the series, appeared over. But with every stroke, Stokes whittled down the target and fanned the embers that were England’s chances of victory. Joined by Jack Leach and his glasses, the target became smaller and smaller. One missed run out, one wasted review and one poorly executed sweep later England were on the brink. You know what happened next…