New Zealand will take on Afghanistan in the 2022 T20 World Cup match on October 26 — here’s the Dream11 fantasy preview, including tips and predictions for NZ vs AFG.

New Zealand started their tournament by avenging the 2021 T20 World Cup final, with a crushing win against hosts and defending champions Australia at the Sydney Cricket Ground. Asked to bat, they got off to a flying start thanks to Finn Allen’s 16-ball 42 at the top. Devon Conway then batted through the innings with an unbeaten 92 in 58 balls to help New Zealand reach 200-3. In response, Australia were never in the hunt after losing three wickets inside five overs. Tim Southee (3-6) and Mitchell Santner (3-31) led the rout as Australia collapsed to 111, conceding a colossal net run rate deficit.

At the Perth Stadium, Afghanistan struggled against Mark Wood’s pace and scored only a run more against Australia despite middle-over grafts from Ibrahim Zadran (32) and Usman Ghani (30). They collapsed against Sam Curran (5-10). But led by Rashid Khan (1-17), their bowlers hit back, even reducing England to 97-5, eventually keeping England at bay until 18.1 overs. Their net run rate (-0.62) is not great, but it is significantly better than Ireland’s -2.467 and Australia’s -0.45.

The teams have met only once, in the 2021 World Cup, in a match oddly similar to Afghanistan’s recent defeat against England. Najibullah Zadran’s 48-ball 73 took Afghanistan to 124-8 as Trent Boult (3-17) and Southee (2-24) shared half the wickets. New Zealand took 18.1 overs to chase the target.

Pick Rashid and Mohammad Nabi and then the rest. They are seasoned cricketers in this format who are likely to fetch points with either bat or ball, if not both.

Do not make Rashid captain. While he will get points, he will not give you a lot of points, as batters tend to play him out. So, fewer wickets, hence fewer points. Instead, back Conway or Nabi.

For the wicketkeeper, back Conway. The milestone bonus points are likelier to outweigh the boundary bonus points Allen or Rahmanullah Gurbaz may get you. If you still have points, get Allen, he is cheaper than Gurbaz.

Pick both Southee and Boult. Compensate for their heavy prices with Glenn Phillips and Mitchell Santner.

Probable XI for NZ vs AFG 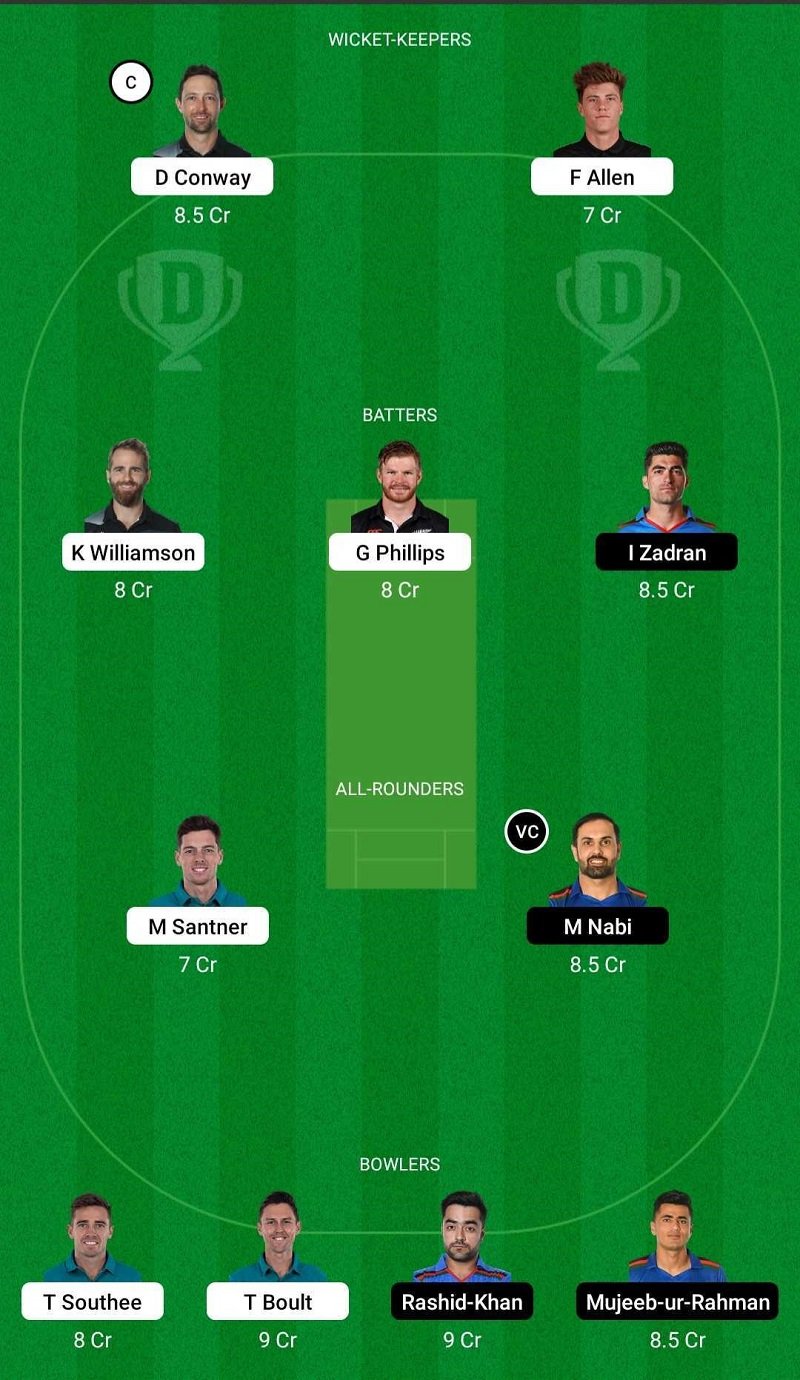