A side strain has put England fast bowler James Anderson in doubt for the third Test against South Africa, which begins on January 16.

Anderson dealt the first blow on the final day of the second Test in Cape Town, which England won to level the four-Test series, by removing Keshav Maharaj early, but looked in discomfort thereafter. He did not bowl in the afternoon session and came on for only two overs in the final session, going off the field several times during the course of the day.

The 37-year-old will undergo scans to assess his fitness ahead of the third Test. Anderson had returned to the Test side for the South Africa series, after recovering from a calf injury that had ruled him out for four months.

Is there anything more satisfying as a captain than a funky field placement bringing immediate reward?https://t.co/bxUN3ZAa4d

“It’s his side, but it could be just a little niggle,” captain Joe Root said after the end of the second Test. “He’ll go for a scan, get some treatment, and we’ll see how he pulls up going into PE [Port Elizabeth, the venue of the third Test]. We’ll wait and see.”

A side strain spells trouble for a bowler of Anderson’s age, and England would not want to risk playing him in the next game unless he is 100% fit.

“We’ll assess him in the morning and take it from there,” head coach Chris Silverwood told BBC Sport. “We’ve got to make sure he’s all right now.”

England were remarkable at Newlands, putting up an all-round display to defeat South Africa by 189 runs. Anderson bowled a total of 37 overs and returned figures of 5-40 and 2-23, the first innings five-wicket haul taking him past Ian Botham to become the Englishman with the most five-fors in Test cricket. 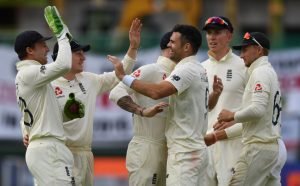 “The side were determined to get over the line and he wanted to go out there and give it a go,” said Silverwood. “When somebody of Jimmy’s quality is potentially going to be missing, it is always going to be a concern for the coach – and concern for the team – because we want him in there. He showed in the first innings that he is a great bowler.”

Meanwhile, Jofra Archer, who missed the second Test because of a sore elbow, is expected to be fit. England also have plenty of fast-bowling options in Mark Wood, Chris Woakes and Craig Overton, in case they decide to rest Anderson.