It wouldn’t be fair to lay the blame for this defeat at the door of the bowlers. India’s seamers were quicker than the opposition, found (marginally) more seam movement, hit good lines and lengths more consistently, and targeted the stumps more. The only basic metric on which they didn’t beat New Zealand was swing movement.

We can look beyond the raw movement/pace as well. According to our Expected Wickets model (which uses all this data, and plenty more, to work out how likely any given ball/over/spell was to take a wicket), the deliveries that New Zealand bowled in this series would typically have averaged 27.40, while the deliveries India bowled would typically have averaged 29.60. The bowling on both sides was of comparable levels.

However, the ability of the batsmen to deal with that threat was certainly not.

Essentially, New Zealand bowled slightly better than India did, and got vastly better results, as India’s batsmen subsided. Without question, the batting failure was the most significant contributor to India’s defeat.

Of course, India’s batsmen going overseas and struggling has been an issue for a while. Yet the extent of the difficulty that Kohli’s batsmen – and the captain himself – have had on this tour is still rather surprising. As a collective, an Indian Test side has only twice averaged less in a series. One of those was in fairly recent memory at the turn of the millenium, but the other was way back in 1969. There is historical scope to the travails of this Indian side on this tour.

Part of the reason for this may have been their technical approach to the seamers. This was a series defined by the quicker bowlers (just five of the 61 wickets to fall in the series fell to spinners), and so the main challenge for batsmen was negotiating the seamers. 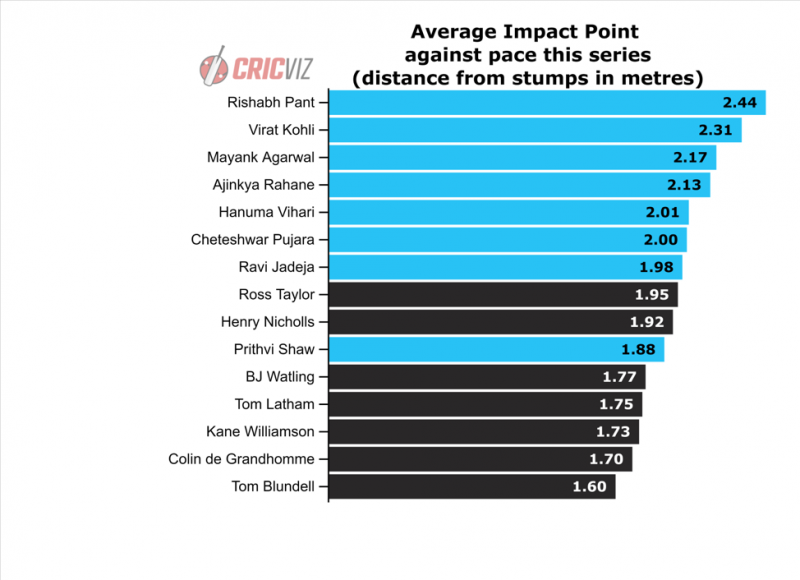 India had a clear strategy. Collectively, India’s batsmen made contact with the ball about half a metre further down the track than the New Zealand batsmen. Broadly, you’d say this could be the result of two different things: one, that they were taking their guard out of their crease, as Kohli has been known to do in such conditions, and the other is that they were playing too far in-front of their body, losing control of their shots. Regardless, there was a pattern to the way they ended up playing the moving ball.

It’s an interesting area, not only from a technical standpoint but from a leadership one. Williamson’s technique against the moving ball has always been to play later, under his eyes, and bring out that trademark dab to the third man. Kohli’s has recently reflected his personality, being far more about counter-attacking, batting out of the crease and looking to avoid late movement, and to disrupt the bowler’s rhythm. Both batting line-ups have, on the face of it, adopted the approach of their captain.

There is mitigation, in part. New Zealand pitches have not been the green and helpful seamers of popular imagination for some time; in reality over the last decade, they’ve been as hard and flat as you would see across the Tasman. Yet this series countered that trend. 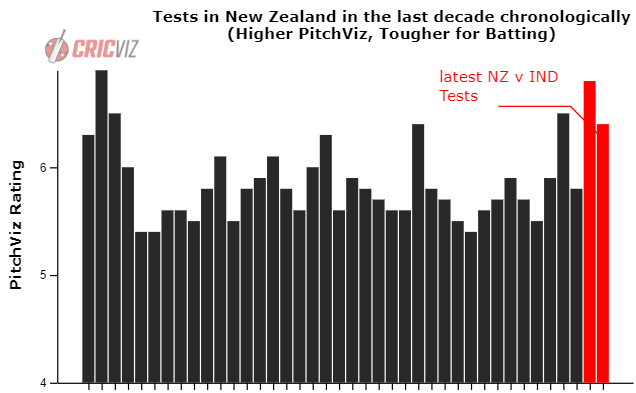 According to our PitchViz model, which uses ball-tracking data to determine the difficulty of any given pitch for batting, the two surfaces we have seen in Christchurch and Wellington have been two of the most bowler-friendly surfaces in New Zealand over the last decade. The overall PitchViz Rating for this series – 6.6 out of 10 – is the highest, and thus most difficult for batting, we have seen in New Zealand since 2010. The conditions on this tour have been extremely unpleasant for batting, evidenced further by the fact no player on either side registered an individual century.

Of course, difficult conditions needn’t be a decisive issue for India. Last year in Australia, they faced tough, lively pitches in Adelaide and Perth – particularly the latter – and competed consistently. The PitchViz model gave the surfaces in that series a rating of 7.0/10, the highest in Australia for a decade. This overall figure may have been skewed by the shirtfront over in the West and the sporting surface in South Australia, but the point stands. India’s batsmen have had success on some difficult pitches, very recently.

Equally, it wasn’t decisive for New Zealand. They were batting in these tough conditions, and despite the fact they were facing excellent bowling, Williamson and co were still able to outperform expectations. They averaged 1.87 runs-per-dismissal more than the Expected Average; they stepped up, and worked out a method to survive good bowling on helpful surfaces; they found a way, and India did not. The pitches should not have been enough to ruin their performance.

So, ultimately, India lost this series because they batted poorly, in very difficult conditions, with a plan that wasn’t suited to the challenge at hand. Some of that is in their hands, some of it isn’t.

In the key moments of the last two years, they have consistently fallen short of expectations away from home. In South Africa, at the start of 2018, they were unable to compete with the bat; in England, likewise, falling down 4-1 to a vastly inferior team; in the World Cup a year later, they faltered at the first moment of jeopardy; and now, they have faltered in New Zealand.

At the time, it felt mean-spirited and misguided to suggest that the absence of David Warner and Steve Smith was the deciding factor in the 2018-19 series victory. In truth, it may still be – Pujara, Bumrah, Shami and several others were consistent and superb on that – but it feels less ridiculous to question that triumph now. It is now far more of note that the only landmark series or tournament in the last two years which Kohli’s India have won was the one where the opposition were artificially weakened to a remarkable degree.

In the last two years, 29 per cent of Tests are won by the away side, and India have won 38 per cent of their away Tests in that time. They are not incapable of qualified success on the road. But it is still of interest that one of the most well-funded, well-resourced cricket teams in the history of the game, are playing 14 Tests in Australia, New Zealand, South Africa and England, and winning just four matches. That needs to change.