After an absorbing fourth day in the second Ashes Test at Lord’s, England seamer Chris Woakes said that the game hangs in the balance, and believes that either team is in with a chance of clinching the win on day five.

“Incredible game so far, and of course I think we can win the game, but all three results are still possible,” Woakes said on Saturday, August 17.

“It’s a great game to be a part of; when I envisaged Test and Ashes cricket as a child, this is what I envisaged it being like. It’s pretty much in the balance.”

“Lord’s was woken up from a game drifting into obscurity. But Smith wasn’t to be forced into submission.”@Taha_Wisden reports on an extraordinary day at Lord’s. https://t.co/rmrsPv2WpI

England are currently sitting on a lead of 104, having dismissed Australia for 250 and then gone into stumps on the fourth day at 96-4. They got off to a shaky start, after Pat Cummins dismissed Jason Roy and captain Joe Root in successive balls in the fifth over. Rory Burns and Joe Denly then led the recovery, putting on a crucial 55-run stand for the third wicket.

Related Story: Hussain explains why leaving out Woakes for Archer or Wood will be ‘sensible rotation’

With Ben Stokes and Jos Buttler currently occupying the crease, Woakes put his faith in the duo to see England through the tricky early exchanges in the morning and set Australia an imposing target.

“We have got 98 overs, so more time than you think, and it’s hard to put a number on it, but we have got to bat sensibly. We have two guys who can accelerate quickly so, as always, the morning session will be crucial. 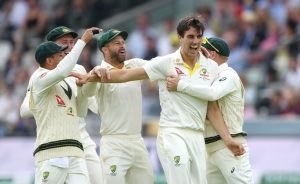 “Hopefully, we can bat well in the morning, and with Jonny [Bairstow] and myself to come, we bat deep. Hopefully at some point, we can have a go at the Australians.”

The highlight of the fourth day was the duel between Jofra Archer and Steve Smith, which peaked when the latter was brutally hit on the back of his neck by a searing bouncer, forcing him to retire hurt on 80. While Smith came back inside an hour to resume batting, he was able to add only 12 more runs, before falling lbw to Woakes on 92, eight short of what would have been a third successive hundred.

"It's a great game to be a part of; when I envisaged Test and Ashes cricket as a child, this is what I envisaged it being like"

“It took a serious spell of bowling from Jofra to kind of get Steve out of his bubble,” Woakes said. “It was incredible to be a part of it out on the field.

“Ashes cricket is played hard and tough, but you still don’t wish injury on anyone.”