England opener Jason Roy has avoided a suspension from the World Cup final, escaping with a 30% fine of his match fee, after his outburst against the on-field umpires during England’s semi-final win over Australia.

Roy launched a tirade against umpire Kumar Dharmasena after being incorrectly adjudged caught-behind. With England motoring along in a 224-run chase, Roy attempted to pull a short ball off Pat Cummins, but the ball went to the left of wicket-keeper Alex Carey, who dived to collect it. Soon after completing the brilliant take, Carey, along with the bowler and some of Australia’s fielders, went up in appeal.

Dharmasena, though he had initially looked uncertain, eventually raised his finger, but replays later showed daylight between bat and ball. With Jonny Bairstow having eaten up England’s review earlier, when he referred an lbw call only for ball-tracking to show the ball thudding into middle stump, Roy had no choice but to walk off. He was on 85 then.

On England's dominating win over Australia in the 2nd #CWC19 semi-final, a bunch of extra-ordinary players, and much more!
Listen and subscribe on the Podcast App/Spotifyhttps://t.co/oJRhW2ZS4f

The sequence of events did not amuse the England opener, who had played some astounding strokes to put England into overdrive on their march to the final. Just a few short overs before his dismissal, he had launched part-time leg-spinner Steve Smith for a hat-trick of sixes. In all, Roy had crunched nine fours and five sixes, and had seemed well on his way to a century before it was scuppered by Dharmasena’s blunder.

Roy initially stood his ground and then made his displeasure abundantly evident as he walked off. He was even heard screaming on the stump microphone: “that’s f***ing embarrassing”. Marais Erasumus, the other on-field umpire, then intervened and had a chat with the batsman before sending him off. A seething Roy was then caught throwing his gloves in the change room.

Related Story: Stuart Broad in danger of ban after being hit with fine by his dad

It was initially feared that Roy’s actions could draw a one-match suspension that would put him out of Sunday’s final. However, he was let off with the minor fine and two demerit points.

The demerit points remain on a player’s record for a period of two years. If Roy cops two more points over the next 24 months, starting from the enforcement of the first sanction, it will amount to a suspension point. Two suspension points would draw a ban for one Test, or two ODIs, or two T20Is, based on what appears first on the schedule.

Though he eventually got away with a slap on the wrist, that was not what former Australia wicket-keeper Ian Healy had envisioned when he said that Roy was “in trouble” for showing dissent. “He’s going to be worse on Saturday night when he gets suspended for the final,” Healy said. “That’s no good. That was a thing called dissent in our day. He has openly argued with an umpiring decision, then carried it on right the way through the pavilion. He’s in trouble.” 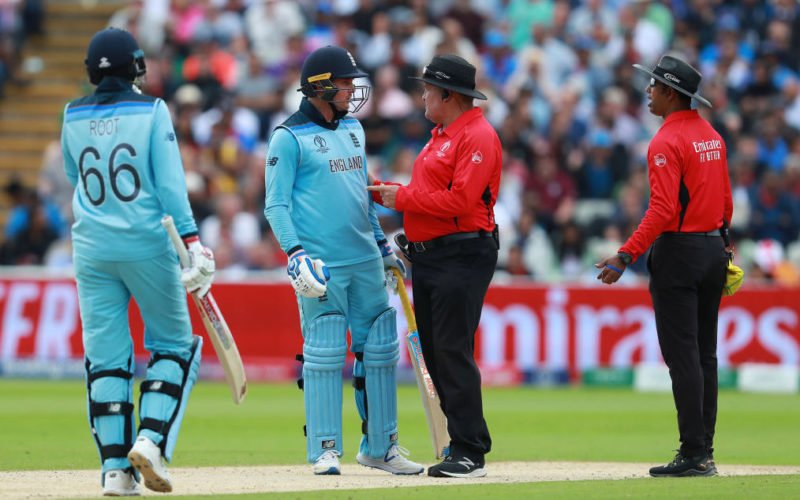 It was a viewpoint shared by Mark Taylor, who said: “It will be a tough one for the match referee. That’s absolute dissent.”

Taylor also said that he did not sympathise with Roy being left without a review, criticising Bairstow’s judgement in using it up earlier. “It’s not a good decision, you can see from the UltraEdge there was no edge in it, but that’s the problem of players wasting reviews,” Taylor said.

“Jonny Baristow, his opening partner and good mate, has cost him. The review is in there for that situation [Roy dismissal], not for blatant lbws that shouldn’t be reviewed. I don’t have a lot of sympathy.”

Roy’s availability for the final would come as a huge relief to England. Roy has been an integral cog of England’s line-up right through this World Cup. He has slammed 426 runs in six innings at 71, with a hundred and four fifties.

His partnership with Bairstow at the top of the order has been a driving force of England’s World Cup campaign, with the duo stitching together three successive century stands. To further illustrate Roy’s utility to this England side, the team lost each of the two matches that he missed with a torn hamstring.