Moeen Ali says the pressure of making the knockout stages at their home World Cup is “an opportunity to be embraced” by England.

Eoin Morgan’s side go into Sunday’s meeting with unbeaten India at Edgbaston in the knowledge only two wins from their remaining two group games will guarantee a semi-final place.

Three defeats to date have left the pre-tournament favourites fighting for survival in a tournament which they hoped would provide a fitting peak to their ODI revolution over the past four years, and their attitude has been questioned in the run-up to the India game in the wake of some spiky Jonny Bairstow comments.

“The worry is that they have failed to come to grips with the specific demands of tournament play.” @the_topspin on England’s problems at #CWC19. ?https://t.co/voRfui6Kkc

Writing in his Guardian newspaper column, Moeen gave a measured assessment of the strain England are under, urging his team-mates to look at Sunday’s opponents if they want to understand genuine pressure.

“The pressure of being the home side shouldn’t be a factor,” he said. “Our next opponent, India, are a good reminder of this because we don’t have to deal with nearly the same amount of expectation as they do.

“They are superstars back home. Win and they are showered with praise, lose and they are on the receiving end of harsh criticism. And they aren’t able to lead everyday lives when they’re not playing because of the attention they receive.

“I have seen this first hand playing alongside Virat Kohli in the Indian Premier League.” 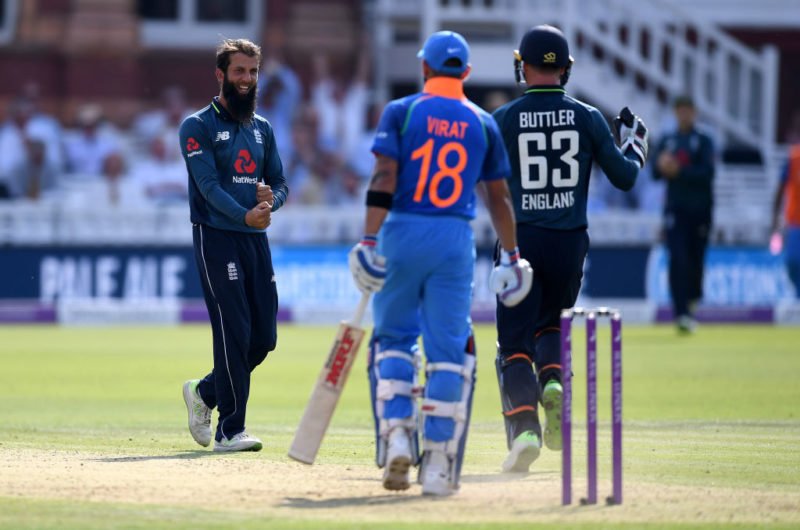 Moeen and Kohli, team-mates at Royal Bangalore Challengers, have formed a friendship which will count for little when England’s off-spinning all-rounder attempts to pick up the India captain’s wicket for the seventh time in international cricket.

“Virat knows he’s there to score runs for India, while I’m here to get him out,” he said. “It means a lot to get a player like him out but you can be still be friends trying to do it. I grew up playing against friends and cousins in the park and it was some of the most competitive cricket I have played. The key here is respect.”

And Moeen, born in Birmingham to a family of Paksitani heritage, is hoping for respect from the India supporters, some of whom barracked him from the Edgbaston  stands when he was in the early stages of his England career five years ago.

Related Story: ‘I was eating like a mad person’ – Kohli used to consume 40 toffee-eclairs in four days

“I probably took it more personally than I would do now,” he said. “I’d like to think we’ve all grown up a bit since.”