India seamer Bhuvneshwar Kumar walked off the field with a suspected hamstring injury and was subsequently ruled out for the remainder of his side’s World Cup 2019 game against Pakistan at Old Trafford.

The incident occured in the fifth over of Pakistan’s chase of 337, when Bhuvneshwar looked in discomfort after bowling his fourth delivery of the over. He seemed to have slipped during his delivery stride, and subsequently walked off the field. While there was no official confirmation, Bhuvneshwar was reported to have suffered tightness in his left hamstring.

Worrying news for India as Bhuvneshwar Kumar walks off the pitch with an injury… pic.twitter.com/LjHWVN7qkP

Vijay Shankar was summoned to complete the over and picked up the wicket of Imam-ul-Haq from his very first ball, his first-ever delivery of this World Cup.

Earlier in the day, Rohit Sharma’s 24th ODI century and a 77 by captain Virat Kohli powered India to 336-5 in their 50 overs. Rohit’s century was his second in this World Cup following his unbeaten 122 against South Africa. Kohli, on the other hand, became the fastest to reach 11,000 ODI runs, reaching the milestone in just 222 innings. He bettered Sachin Tendulkar’s 17-year-old record of 276 innings. 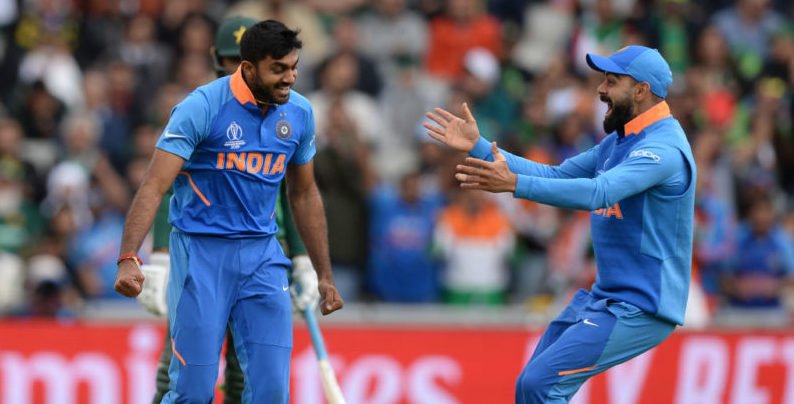 Replacing Bhuvneshwar, Vijay Shankar picked up a wicket off his very first delivery of the World Cup

The latter half of India’s innings was affected by intermittent showers. For around an hour between the 47th over rain suspended play, even though India returned to bat their full quota of 50 overs.

Bhuvneshwar could complete only 2.4 overs, giving away eight runs, before he had to walk off the field. He took five wickets in India’s first two games against South Africa and Australia. Their game against New Zealand was washed out due to rain.

Related Story: How a Pakistan fan tried to rile up India’s players ahead of 2019 World Cup clash

In July last year, Bhuvneshwar suffered from a back injury that forced him to return home midway through India’s tour of England. He returned only in September for the Asia Cup in the UAE.

In Bhuvneshwar’s absence, India were left with only one frontline pacer in Jasprit Bumrah, with all-rounders Hardik Pandya and Vijay Shankar being medium-pace options. The side went with two spinners in Yuzvendra Chahal and Kuldeep Yadav for the game.