Australia captain Tim Paine was in the eye of the storm after his side’s defeat in two out of the last three Tests against India, but at least three other people with almost exactly the same name ended up receiving flak on social media

Tim Paine’s namesake, Tim Payne, the former England rugby union player, who runs a verified Twitter account with the handle “@timpayne_1”, was seen regularly interacting with fans on the social media platform, battling criticism over his wicketkeeping, batting form and captaincy. Fans kept tagging him in their posts, as Australia lost their first Test at the Gabba in three decades.

Hilariously though, Payne regularly responded to the unexpected attack rather sportingly, diffusing angry fans with amusing responses. He even tweeted out to the actual Australia captain, tagging his handle ‘@tdpaine36’ and requesting the 36-year-old wicketkeeper to intervene.

Incidentally, Payne wasn’t the only one who was the victim of an identity crisis. On Instagram, another Tim Payne dealt with fans who directed criticism at him through direct messages with the assumption that they were texting the incumbent Australian skipper. According to screenshots shared by Payne on his Instagram stories, he received comments ranging from his verbal duel with Ravichandran Ashwin in Sydney to reproval of his captaincy. Unfortunately, he had to cop abuse from certain fans as well.

Payne was forced to post a clarification where he revealed he had received “600+ message requests and constant spam comments”, and ended up putting his morphed face over a Tim Paine image, using the caption “plot twist’.

That wasn’t all. A third Tim Payne (timpayne__), a professional footballer with Wellington Phoenix FC, also shared stories on his verified Instagram account, posting screenshots of fans going overboard with their criticism of the Australian skipper. 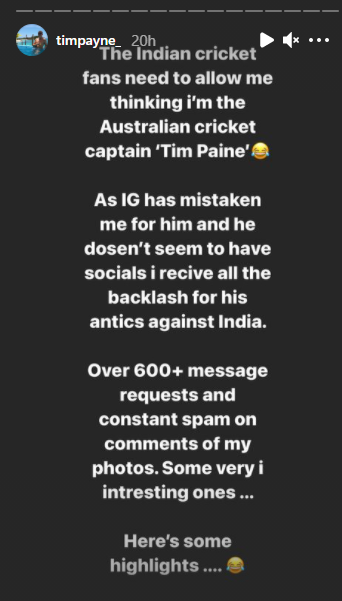 But I don’t want to retire, I love the wicket too much

I don’t think I should retire

Hi @tdpaine36, can you help me out here. I’m doing my best. Hope you’re well.